ARG M: Marcelo Mendez, one of Argentine coaches around the world

Always looking forward. That is the path of Marcelo Méndez, another of the successful Argentine coaches that work in different countries around the world. Since 2009 at the very competitive Superliga from Brazil, where this last season he won the first historical title for Sada Cruzeiro he things on his great experience as coach. 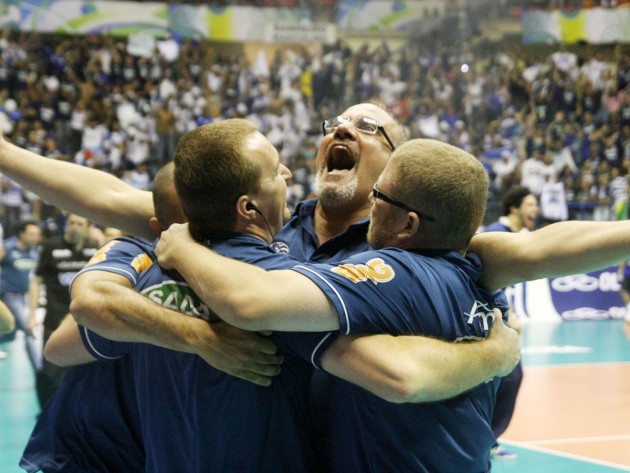 After working for a long time in Europe, at different teams and with the Spanish National Team, he moved to Brazil in 2009. Then, he was hired by Funadem Montes Claros in a “very serious project that started from cero, where nothing was done“. This first challenge, as he mentions, was very positive. “We hired players and started as a team. After four months we won the O’Globo Cup against Cimed, Minas and Sada Cruzeiro and then the Mineiro Championship eliminating at the semi-final match Sada and overcoming Minas in the final match“.

Something saw on him the officials of Sada Cruzeiro that hired them just one month prior the start of the League 2009/10. “We played an outstanding league but lost on one of the semi-final matches” he remembers.

At that moment the hard work started including the grass-root teams. “We renewed most of the coaching team and players. Only the opposite Wallace (now as player of the Brazilian Seniors’) and the middle player Douglas; the rest of the team changed and we started playing with Youth and Junior teams” he explains. Results arrived this season with Sada Cruzeiro winning the International competition of Irwine and the Mineiro Championship and showed a great campaign at the Superliga 2010/11, reaching the final series.

Then, the team coached by Mendez looked forward to winning the league during this new season and the goal was fulfilled. “Maintaining most of our players and adding some talented juniors the season 2011/12 found us winning all the competitions in which we participated: Irvine, Mineiro and the Superliga“.

At the time of making the balance he adds: “One of the most important things of the team is that it is a great group of athletes that knows well what they do right and what needs improvement. They work very hard during long hours and that can be then seen in the field when they compete“. Even though the local title was obtained work goes on with new goals. They keep training hard “because a team as Sada Cruzeiro want to be the champion. We want to repeat this season’s results. And obtain the South American and the World Club competitions“.

With his great international experience he thinks on the Argentine League and the National Team as the main projects of Argentine Volleyball. “I think that the league is improving. There are many teams with more budget as the Brazilian and European teams. Argentine players play very well volleyball and many are even better than foreign ones. Anyhow teams are reinforcing themselves hiring foreign players“. With reference to the national team he expresses “I see a great improvement and it will go on growing. They have an outstanding coach and very talented players that allows the team to think big“.