The second day of the four-teams friendly competition held in the city of General Alvear was very exciting. With matches during the morning and afternoon, in an only round-robin pool - all against all, this Friday the top team, the Argentine Seniors' will face the fourth's Mendoza while the Youth's will play the other one v San Juan. The Seniors' won their three matches. 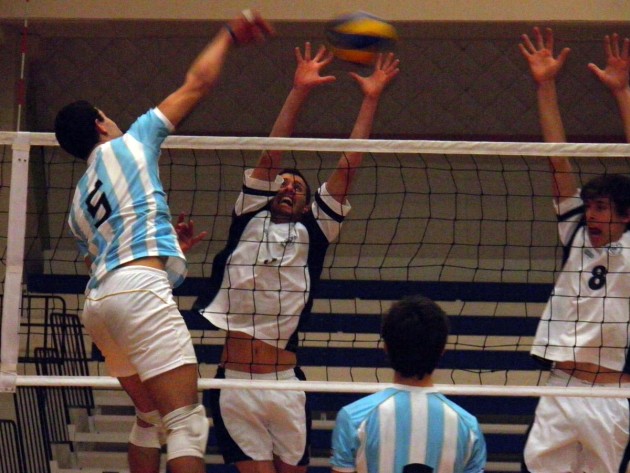 During the morning, the Youth’s Boys gave a new step in their preparation towards the South American Championship defeating the host team of Mendoza in straight sets (25-15, 25-20, 25-23). Paul Alegret, from Mendoza and once wearing the light blue – white jersey topped the score with 16 points while for the boys coached by Julian Alvarez, Brian Melgarejo as opposite player scored 15 points.

Then, it was the time for the Seniors’ Men and San Juan in a match that also ended 3-0 for the Argentine team but showing a much levelled fight that finished 25-20, 29-27, 25-23. Federico Pereyra, the light blue – white opposite player that participated of this year’s Seniors at the Olympic Games lead the Cuyo team with 22 points while for the boys coached by Fabian Muraco, Gonzalo Quiroga (16) and Cristian Assaf (13) topped the score.

In the evening the first match was played by both teams without any victory. In the “classical” Cuyo region match San Juan overcame Mendoza 3-0 (25-22, 25-19, 25-18). Pereyra was once more the top scorer with 23 points while Villalba also from San Juan scored 15. Therefore San Juan finished on the third place while Mendoza on the fourth.

The important and interesting match of the day was the final one between the Argentine Juniors’ and Youth’s teams. It was played to their utmost with the Seniors winning 3-1 (22-25, 25-19, 25-22, 25-20) in a terrific duel with the younger grass-team winning the first set. Quiroga and Nicolas Lazo equal the top score with 17 points each for each team .

This Friday, the Seniors that finished first will face Mendoza while the Youth’s, second will do the same with San Juan while on Saturday the final matches will take place.