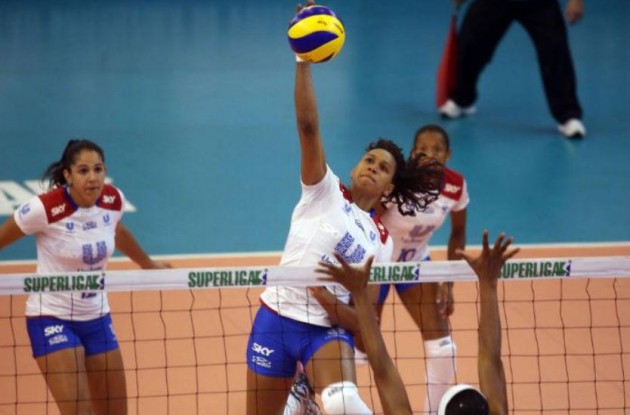 The first set started with the supremacy of Minas, which came to an eight-point advantage. However, at the end of the set, Rio Do Sul reacted and managed to reduce the lead to four points. But that was all they could do in this set, Minas won 25:19.

Rio Do Sul wasn’t affected by the first set. Pushed by the crowd, they returned to the second set and were leading on the first tehnical time-out by 8-5. They continued their good game, on the second tehnical it was 16-11. After that it was even better, they won the set 25-16.

Usiminas Minas came back in the third, especially thanks to their block and closed it with the score 25-20.

Just as happened in the second set, Rio Do Sul came back very well after losing the previous set. They needed this set to stay in the game.

With many errors of Minas, Rio opened a lead of eight points (11-3). They kept the lead and reached the second technical time-out with the score 16-8. Rio continuted in the same fashion and closed the fourth set by 25-18, taking the match to the tiebreaker.

Minas started with the two point lead in the tie-break, but Rio Do Sul fought back, arriving to 5-4. Minas responded, both teams took turns in the lead in the set.

Neneca made the difference and took the responsibility, digging balls and exploring Minas‘ block. A player of 24 years, helped her team open the three-point advantage 11-8. Usiminas Minas failed to react and Rio Do Sul closed the game by 3 sets to 2, with the score 15-13.