Brazil recovered from last night’s defeat against France to end their Pool D campaign with a straight sets victory over winless Venezuela (25-14, 25-23, 25-) in the FIVB Men's U21 World Championship at İzmir “Atatürk Sport Hall” in Turkey. 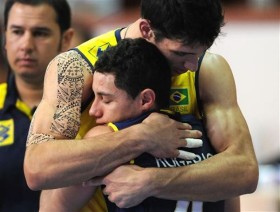 With this win “canarinhos” finished the preliminary round with a win-loss ratio of 2-2 and 8 points to be ranked third in the pool and battle against USA, 2nd of Pool C, in the Round of 16.

At the same time, Venezuela dropped to 0-4 and they will play for 17 to 20th position.

Brazil dominated the match completely through their sharp spike services which put the Venezuelan team under stress and thus they couldn’t build up their attacks.

Brazil also dominated in the blocking segment at the net making a wide difference of 12-3 and this was the key factor in the victory.

Opposite Alan Souza and outside hitter Douglas Souza were the key factors in the Brazilian victory and finished as match scorer with 14 points each. Venezuela big gun Roberth Abreu was his team’s best scorer with 9 points.

POL W: One of the most beautiful players will miss EuroVolley