Iran achieved their fourth consecutive victory in four matches at the FIVB Volleyball Men's U21 World Championship in Ankara to finish unbeaten on top of Pool A. 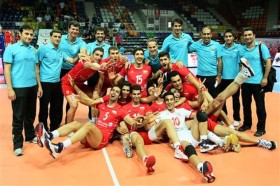 Mexico’s good blocking was not nearly enough to put a brake on Iran’s flight to the top position.  In the first two sets Farhad Nafarzadeh’s players once again showed their abilities to play some great volleyball.

Inspired by their fans on the stands who gave them amazing support again, the Iranians moved to gain a 2-0 sets advantage with 25-20 and 25-21.

Despite having already secured the first place in the pool, they did not stop at that and continued to dominate on the court during the third set. After 25-17 they certainly had a good reason to celebrate.

Roberto Rincon scored 15 points for Mexico to top the scorers’ chart of the match. Ghara Ebadipour made 13 points for Iran.

See the WoV Community profiles of the Junior national teams of Iran and Mexico.