Belogorie has signed a contract with the middle blocker Alexander Bogomolov, announced the official website of the team from Belgorod. 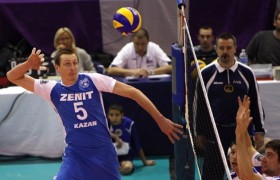 Bogomolov was the last newcomer in the Russian champions in the offseason.

The last club of a 37-year-old player was Iskra Odintsovo, where he played since 2010.

See the WoV Community profiles of Bogomolov and Belogorie.