POL W: One of the most beautiful players will miss EuroVolley

Anna Werblińską(29 years old) will not travel to the European Championship. She is still not fully recovered from severe knee injury. 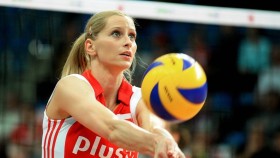 One of the most popular Polish female athletes will watch the September’s competition on TV. Last season Werblińską was engaged with her knees problems. She healed one leg, but she still has problems with the other one.

The player believed she would go to the EuroVolley, but she will not take her place in the Polish team, who trains for the tournament for a long time. This year, Anna Werblińską has not participated in any of the national team training camps yet.

Polish women’s national team will begin to compete in the European Championship on September 6. In the absence of Werblińską, the competition loses its attractiveness.

Over the years, Polish receiver was winning contests for the most beautiful player at several championships.