Playing at home in the Rio de Janeiro Olympic Games, with all the much anticipated glamour in a country in love with her sport, would be like icing on the cake for veteran libero Fabi Oliveira. 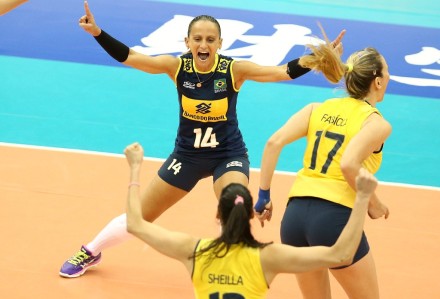 But at the same time the tiny defensive specialist envisions and dreams with the possibility she is also conscious about the inexorable passing of time and the brevity of a sport career.

“I’d love to play at home in Rio but at the same time I am 33 years old now,” said the two-time Olympic gold medalist and best libero at the 2008 Beijing Games. “I need to take it step by step and one year at a time.”

Fabi, who started playing at 13, had her first stint with the Brazilian National Team in 2002 when she was called by then coach Marco Aurelio Motta. After a brief absence, she came back in 2005 and since then has been a mainstay in the green and yellow squad.

The Rio de Janeiro native listed her priorities while participating in a post-game press conference together with teammates Fabiana Claudino and Natalia Pereira after the victory over United States in the FIVB Women’s World Grand Champions Cup on Tuesday.

“First of all we have this tournament and then I have to play in the Brazilian national league (she plays for Unilever), next year we have the World Championship and then the World Cup,” she said. “That is a lot of events.”

Even though she indirectly admitted feeling the normal aches and pains related to a long career at a very demanding position, Fabi displayed a beaming face when talking about the chances of a third Olympic Games, this time at home and at 36.

“I would love to play in Rio but I have to be realistic and I want to take one tournament at a time and then one year at a time,” she said.

In other words, Fabi doesn’t approve the idea of crossing the bridge before getting to it.