BRA M: Ricardinho: Both teams deserve to win the title

"We are ready to do our best. No Injury, no pain, this is a game to play with the heart and total concentration," said Oreol Camejo, best spiker of the competition. 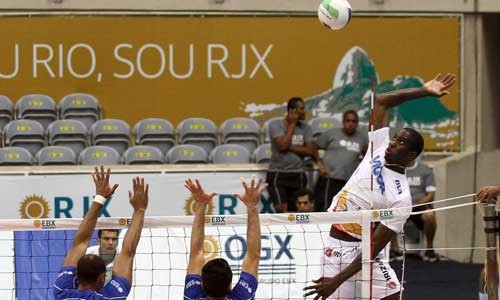 Sada/Cruzeiro and Volei Futuro made on Thursday morning the first training session before the final of men’s volleyball Super league 11/12. The teams, seeking their first title, trained in the Hall Poliesportivo in Sao Bernardo do Campo (SP). The final will be held at 10am this Saturday (21.4). The decisive showdown will be broadcast on TV Globo and channel Sportv and Sports Interactive.

Acacio, middle blocker Cruzeiro team, is willing to change the history of last season when he finished with the runner-up.

“Out of court both teams respect each other. They already consider this game a classic Brazilian volleyball. The Volei Futuro is a team with tradition. We have one more shot at one end of Super league. Last year we hit the crossbar. This year we want this title,” says Acacio

“Fans of Cruzeiro have really supported us throughout the competition. I’m sure this will give us a lot of strength“, the player bets.

Companion of Acacio in Sada Cruzeiro, the opposite Wallace ensures that the team is prepared for the decisive match.

“We are peaceful. We have the experience of having played the final in last year. Our group is amazing and deserves that title,” said the spiker, who appears as the third best scorer of the championship with 458 points (408 attack, 37 blocking and drawing 13).

Best scorer in Super League with 516 points (448 attack, 38 and 30 lock drawing), opposite Lorena (Volei Futuro) says that the two victories of Sada Cruzeiro this season by 3 x 2 and 3 x 1 does not mean that the result of the final will be the same.

“The two losses do not represent the Sada Cruzeiro is a bogeyman. Bet on a balanced game because both teams are very well prepared. Their team is reaching for second consecutive time the final and they have a team with great players,” said Lorena.

Known to always play with great emotion, Lorena is ready for the final. “I consider this as the championship game. Now, I want to have fun. This is a time for enjoy. Having arrived here there is no achievement because we all want the title, but in the end, who has bigger determination will be CHAMPION,” says Lorena.

Ricardinho, Volei Futuro, speaks about the quality of the finalists. “Today there is already a rivalry between the two groups. The work of Volei Futuro is excellent. However, both teams did a great competition and deserve to win the title,” concludes Ricardinho.

Sada/Cruzeiro has the best spiker of the competition and Volei Futuro the best blocker.

Who will became the CHAMPION???