Yesterday (April 21) Sada Cruzeiro became the new champion of the Brazilian men’s Super League after defeating Volei Futuro with 3-1 in the final match. 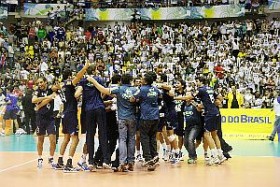 The coach of Sada Cruzeiro, Marcelo Mendez, was thrilled with the title – This victory is very important to me. I think that trust was essential. Moreover, in difficult moments of the match the team had the patience to play. Last year we needed a little to get the title.  This year the team has matured and played much better. This is the victory for the team.

The leading scorer in the final with 20 points, the setter Mauricio, thanked for the chance to play in the current team – Today I am a more experienced player. Sada Cruzeiro gave me the opportunity to help the team and become the champion. Now I know that I have to prepare myself much more, because every year we have the best league in the world.

The third best scorer of the League, the opposite Wallace, thanked the fans to the support – They cheered for our team, as they always do. It was a tough game but we managed to fulfill our goal thanks to the unity of the team.

The setter and the captain, William, lifted the trophy and left the court as the best player of the match. – We are aware of our qualities and we deservedly took the victory. In sport one wins and another loses. We wanted a lot to win the championship last year, however, we lost. The life of a sportsman is like that and we must learn more in defeat than in victory.