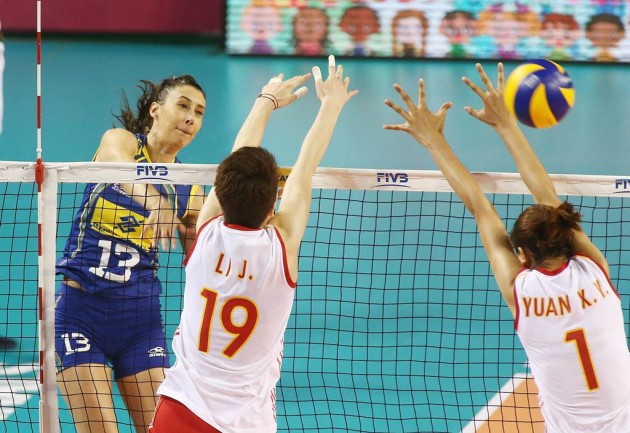 China opened the game by taking the lead 5-2. Fernanda Garay and Thaisa Menezes made mistakes and China took the opportunity to make three points of advantage.

They kept the lead until the first TTO, than Ze Roberto’s advices helped Brazilian girls to make 8-2 run and to take the control of the set 13-10.

The reception of Brazil was getting better and better (23-19). China answered with two quick points which made Rezende to take the time out.

Fabiana scored a point for 24-22 and she went out of the court because of injury. China saved one set ball and was close to tie the result but Jaqueline Carvalho was the scorer of the point that gave Brazil 1-0 lead.

Fabiana came back in the second set after she left the court during the first set.

Reception mistake by Garay and serve error by Fabiana gave China the lead, 7-5. Garay made again mistake, but this time in attack and China had three point of advantage (11-8).

Brazil quickly managed to tie the score (11-11) after amazing point by Jaqueline from zone 6. China’s coach had to call a time out.

Chinese girls retained the advantage of two points on the second TTO (16-14). Ze Roberto’s advices helped again and Brazil made 4-0 run to take the lead 18-16.

The setter of the team from South America, Dani Lins, made a few good choices, Garay and Fabiana scored key points and Brazil had five sets ball (24-19).

Garay and Jaqueline had 15 points each, while Liu Xiaotong finished with 13 points in China.