FIVB M: Brazil and Poland clash highlight round three of Pool B

Pool B of the 2012 FIVB Volleyball World League moves into round three on Friday as world No.1 Brazil host Canada, Finland and group leaders Poland in Sao Bernardo. 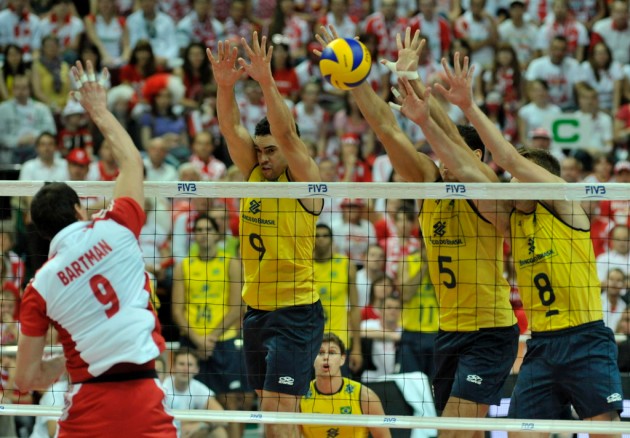 The Poles remain top of the pool followed by Brazil who are two points behind on 12. Meanwhile, Canada sit on six points, two ahead of the lagging Finns.

Brazil bounced back from a disastrous opening weekend by sealing two wins and a close five-set loss to Poland in Katowice last Sunday, helping them move into second place.

However, the loss to Poland will have hurt so they will hope their home fans can drive them on to three wins and a perfect weekend which could see them take the lead from their European rivals.

-They have the best win-loss record against all three teams, losing just 16 of the 77 matches they have played against them in FIVB competition

With two rounds of the World League over, Poland may start to look towards the finals as they sit two points clear at the top of the pool. They delighted their home fans last weekend with three wins and head the group after some solid attacking displays.

However, Andrea Anastasi’s men cannot afford to be complacent in Brazil and will be determined to keep their mind on the court and not on the finals.

-Have lost just two sets to Canada in seven matches, one in the first round of this year’s World League and one during the 2002 World Championships

Canada crashed back to earth after a promising opening weekend at home by losing all three of their matches in Poland, so will be keen to regroup. The side, who returned to the World League after a four year absence, ended the weekend with a marathon five-setter against Finland, the highest scoring game of the weekend, and they narrowly lost.

-Are yet to beat Poland in any FIVB tournament

Finland look to move up the table

Beating Canada in that five-set match will have given Daniel Castellani’s side confidence coming to Brazil. Mikko Oivanen matched Canadian Gavin Schmitt’s record 33 points in that game, proving that the Finns have danger across the court.

They will see their match with Canada as a chance to move off the foot of the table, with revenge for their loss to Poland and Brazil also on their mind.

-Only beaten Brazil once during the 2009 World League

FIVB W: World Grand Prix returns with Olympics in sight for many