FIVB W: World Grand Prix returns with Olympics in sight for many

The countdown to the 2012 FIVB Volleyball World Grand prix is nearly over as 16 of the world’s top teams get ready to battle it out in the world’s premier annual women’s tournament. 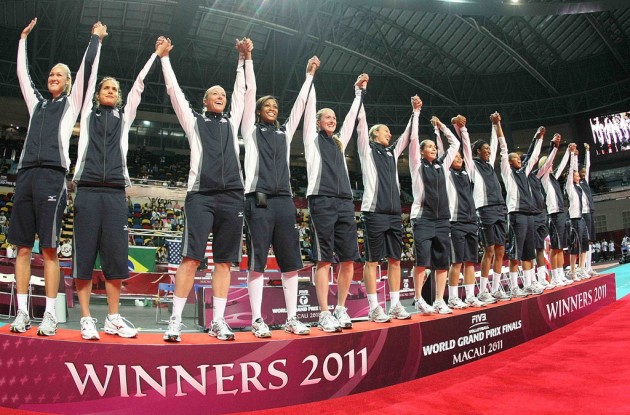 Three weeks of Preliminary Round action from June 8 to 24 precedes the Finals, set to take place in Ningbo, China from June 27 to July 1 with competition for the top six places set to be fierce.

The 20th edition of the tournament is expected to be the most hotly contested yet, with nine of the teams looking to build momentum ahead of the London 2012 Olympic Games.

This year, the tournament will visit 13 cities across nine countries offering fans a true volleyball feast on a global scale.

USA will be hoping to become just the second team in history to complete a hat-trick of titles, repeating Brazil’s feat from 2004 to 2006. Coach Hugh McCutcheon will be hoping last year’s MVP Destinee Hooker is on top form.

However, they will face a stiff challenge from world No.2 Brazil. They are on the hunt for their ninth title and will also want to prove that their disappointing fifth place finish at last year’s FIVB Volleyball Women’s World Cup in Japan was simply a blip on the radar. The two teams will clash in Sao Bernado on week two of the tournament in what is already expected to be a huge match.

A number of European sides will also feel they are pretenders to the crown, most notably Italy. The world No.4 have never won a World Grand Prix, their best result a silver medal in 2004 and 2005. But their gold medal victory at the World Cup last year will have given them confidence.

Serbia will also be eager to follow up on their bronze medal last year. They may have only finished seventh at the World Cup, but they were crowned European champions last year and have a number of game-changing players looking to cement their place for the Olympics after they qualified for London.

Germany, led by Christiane Fürst alongside legend Angelina Grün and the talismanic Margareta Kozuch, will want to improve on previous years. On their day the side can beat anyone, but have struggled in the last two years, finishing ninth in 2009 and 13th in 2011.

Turkey have had a good run of form recently, winning the CEV Continental Olympic Qualification Tournament in front of their home fans. However, this is just their second World Grand Prix after their seventh-place finish in the 2008 edition of the tournament, so their lack of experience could prove costly.

Completing the line-up of European teams is Poland who are competing in their ninth World Grand Prix in a row. They haven’t made the finals since 2010 so will be looking to return and improve on their highest ever ranking of sixth.

Japan and China are likely to be leading the charge from Asia. China are already guaranteed a place in the finals as host and will play all three weeks at home in Macau, Foshan and Luohe. While they will be buoyed by their bronze medal at the 2011 World Cup, the loss of Wang Yimei to injury is a big blow for the side.

Japan have improved drastically over the last few years, finishing fifth during last year’s tournament. They will be hoping to use their speed to breakdown opponents with the likes of Saori Kimura always a threat.

Korea finished second at the World Olympic Qualification Tournament in May after steadily improving during their 2011 World Grand Prix and World Cup campaigns. A place in the finals has eluded them since 2003 and they have only ever medalled once, a bronze in 1997, so will want to remedy that.

Thailand recorded their best ever result at the 2011 edition of the tournament, with their sixth-place finish marking an historic moment. However, they were left devastated after narrowly missing out on a place at the London 2012 Olympic Games, finishing behind Japan at the World Olympic Qualification Tournament. The world No.12 will want to bounce back quickly with a solid performance.

Rounding out the teams from Asia are Chinese Taipei, who return after missing last year’s competition. Norimasa Sakakuchi’s side have never finished higher than 12th in their three outings in the World Grand Prix so that will be their first target.

NORCECA will be represented by three teams in Cuba, the Dominican Republic and Puerto Rico with the latter returning after a one-year hiatus in 2011.

Cuba are without a doubt one of the most successful countries to compete in the tournament, with two gold, four silver and two bronze medals. However they struggled on their return to the competition last year, finishing 11th.

This was one spot higher than the Dominican Republic who will contest their ninth World Grand Prix. They will have the edge over their regional rivals however, beating them to an Olympic berth at the NORCECA Continental Olympic Qualification Tournament in May.

Puerto Rico have only ever played in two World Grand Prix tournaments, in 2009 and 2010, finishing 10th and 11th respectively. They will be based in Japan and China for the whole tournament so will need to adapt quickly if they are to make a successful run.

Argentina are the only other South American team set to battle it out alongside Brazil in this year’s competition. They sealed two wins on their debut last year, two epic five-set matches against the Dominican Republic and Cuba, both in Poland. However, they still finished 14th so will be aiming to step up a gear this time around.

FIVB M: A ticket to London awaits for booking in Sofia

FIVB M: Brazil and Poland clash highlight round three of Pool B