World No. 5 Cuba pulled off a huge upset in the opening match of the FIVB World League Finals in Sofia, Bulgaria on Wednesday by beating world champions Brazil 3-0 (25-19, 26-24, 25-22), the first straight sets victory for Cuba over the nine-time World League winners Brazil since the 1999 World League semifinals. 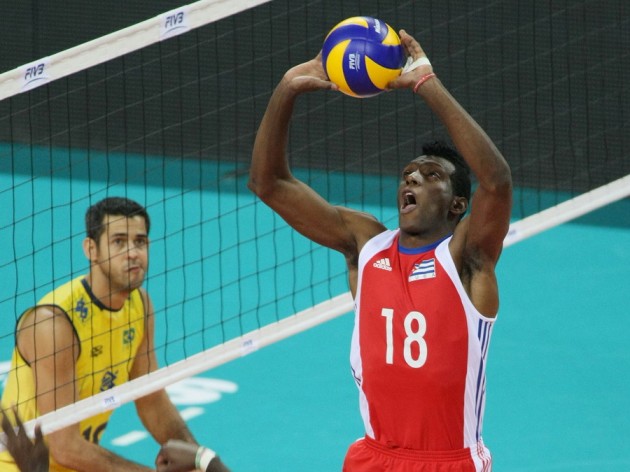 The victory is Cuba’s second in succession over the world No. 1 after they recorded a 3-2 win at last year’s World Cup however Brazil still lead the head to head record just with 27 victories in 52 encounters and 12:11 in the World League.

Almost no mistakes on serve and an astonishing high success percentage rate in attack gave Cuba the victory. Bernardinho‘s boys just could not enter the match and looked totally shocked.

Cuba took the lead in the beginning and closed the first technical time out 8-5 ahead. With their block working well and dangerous spikes to the fore, it made things easy for Orlando Samuels’ players. Captain Wilfredo Leon caused plenty of problems, especially with his high speed serves, causing great confusion in the Brazil reception. Brazil slowly awoke from their slumber but by then it was too late as Cuba closed out the first set 25-19.

Cuba kept their tempo in the second set opening an early lead. With a continued aggressive attacking game they successfully led at the second technical time out 16-12. However with Rodrigo and Thiago joining the fray Brazil finally clawed their way back tying the set at 24-24. However it wasn`t enough , as a sublime Rolando Cepeda spike down the line gave Cuba the set 26-24.

With Murilo on the bench, things started to click for Brazil in the third set. The lead changed hands many times before Brazil went into the first technical time out 8-5  ahead. They continued to lead but a couple of blocks and Leon`s great serving let Cuba back into the set. Samuels’ charges continued giving Brazil a hard time with powerful serves as they soon held the lead at 16-15 before wrapping up the set and the match in superb fashion.