Brazil advanced to the semifinal round of the VII Men’s Pan American Cup after prevailing in four sets against Canada on Thursday. The South Americans were able to recover from a shaky start to win by scores of 23-25, 25-16, 25-18, 25-13. 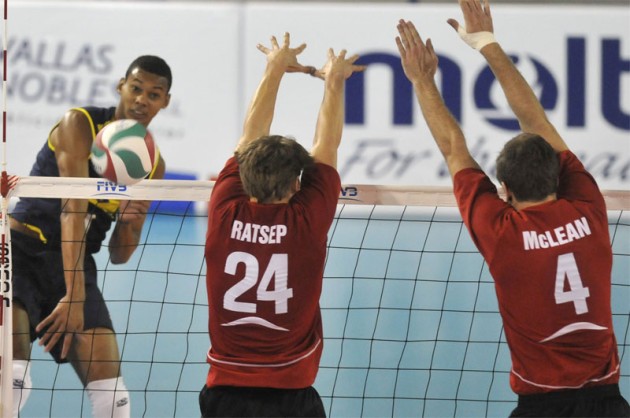 Tiago Gatiboni led the winners with 14 points, followed by Mauricio Borges (13), Alan Souza Ferreira (12) and Henrique Rodriguez (11), while only the opposite Dane Pischke (10) reached the double digits for Canada.

Brazil’s coach Leonardo Carvalho considered the match a very tough one, especially in the first set. “The Canadian team is very young but they have a very strong blocking and good defense, which created many difficulties to us.“

Lawrence McKay, coach of Canada, praised his team which showed progress during the four matches. “This one was better than the others and I just hope they continue to develop and gain experience.”

Brazil’s captain Raphael Vieira de Oliveira said: “The first set was very bad as the Canadians put us in trouble. We are happy about reaching the semifinals, but to win we need to play better against the Argentineans tomorrow“.

Canada’s captain Burt Maxwell said: “Brazil is a very difficult team. You always have to battle because they force you to win every point.”