Brazil edged Serbia 3-2 in the last match of the day (22-25, 25-15, 20-25, 25-22, and 15-9) to improve its record to 3 wins and 1 loss so far in the tournament. Sidnei Dos Santos paced the triple world champions with 15 points, including 6 blocks, while Serbia’s charts were topped by Nikola Kovacevic with 16. Brazil stood out in blocking with and serving to re-start their chase for Olympic glory while Serbia dropped down to 3 losses and 1 win so far in the tournament. Having to play Russia in the last round of the prelims, the chances of the 2011 European champions to make it to the 1/4 finals look very slim, but they shall not be ruled out as on Saturday night they displayed once again all of their well-known fighting spirit. 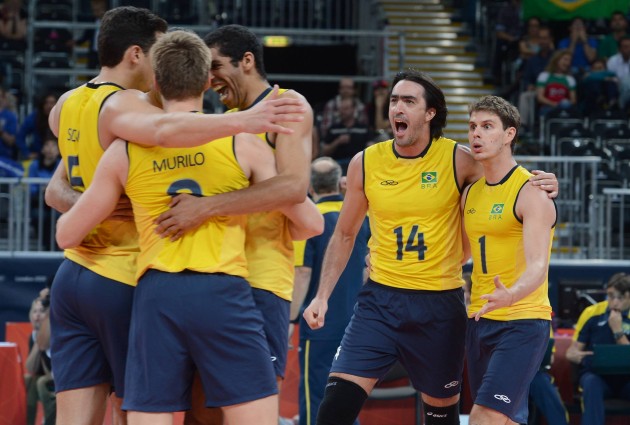 The first set was close. Leandro Vissotto and Lucas Saatkamp hit kills for the South Americans, while Sasa Starovic, Marko Podrascanin and Dragan Stankovic spiked for Serbia. But with Nikola Kovacevic and his brother Uros also firing, Serbia took the first set 25-22.

Brazil edged ahead in the second set when Murilo Endres and Dante Amaral joined forces with Saatkamp and Vissotto to give Brazil a healthy lead, and they ran away with the set, 25-15.

The final set mirrored the fourth, with Serbian errors and the spiking of Wallace and dos Santos the difference. Brazil suddenly looked a class above the Serbs, and took the set 15-9, and the match.

Brazil, who have three wins and one defeat, meet Germany in their final group match on Monday, while Serbia play Russia.