CWCH W: Osasco to get the 1st wild card?

According to the info from Brazil, Osasco will get the wild card to participate at the 2017 FIVB Women's Club World Championship. 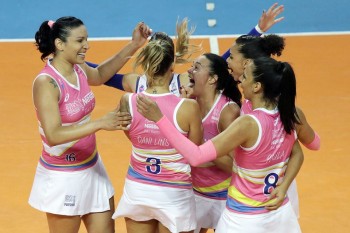 So far we know only 2 out of 8 participants of the 2017 FIVB Women’s Club World Championship. Those are the two Japanese clubs – Hisamitsu Springs as the hosts and NEC Red Rockets as the 2016 Asian Champions.

The following 6 tickets will go to the 2017 European Champions, to the 2017 South American Champions and to the 4 teams who will get the wild card from the FIVB.

According to Bruno Voloch, the 1st wild card will go to the Brazilian team Osasco, who was the winner of the FIVB Women’s Club World Championship back in 2012.

We are still waiting for the official confirmation.

ARG M: Velasco – “The best coach in the history of Argentine sport? It’s an exaggeration”