F4 in Rome: Bernardi – „We beat favorites“; Christenson – „What happened with video check?“

This is what home crowd means! Sir Safety Perugia were pushed by the fans in packed „PalaLottomatica“ in Rome in the Final Four derby of Italian giants so, the quality of their players simply had to come to the fore. 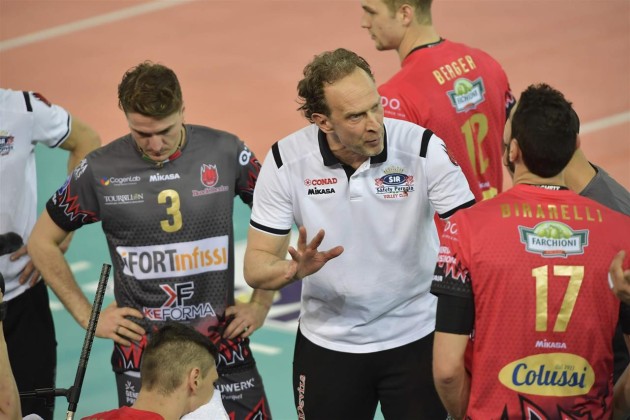 „Of course I am happy with the result but we have to keep in mind that we still have not won anything. Today we will play an incredibly strong team – but I repeat what I said yesterday already: today we beat the favourites of this competition. Tomorrow we will be the underdogs and play with the same intensity and joy we showed today. I always try to keep my players as motivated as possible and I did so after we lost badly to Trentino in the semis of the national league. Anything can happen and it is in our hands to make it happen again,”  Perugia coach Lorenzo Bernardi stated after the semifinals of the 2017 CEV Men’s Volleyball Champions League versus Cucine Lube Civitanova.

„At this moment, the disappointment for a semifinal that we wanted to win prevail, but unfortunately we lost in the tie-break although we wanted to play better. Perugia have its merits for this, putting us in the state not to be able to play our best. They were good despite our good serves and managed to achieve consistencyin reception. This is where a creative setter as De Cecco made the difference. Two quality and determined teams clashed, they were better than us. Today we have a game to play and now we focus on that,“ Lube coach Gianlorenzo Blengini stated.

“It is such a disappointing feeling, that we were giving everything that we can, every point is so important and things like that happen: the lack of video check, all of a sudden, it’s really a game changer. To have errors like that is disappointing for the players and the fans, because it is here to get it right. It is not an excuse; we had our chances, we had our opportunities to come back in the fifth set, but it feels disappointing. It’s so difficult to go to a next match right now after a five-set game, so close and decided after a couple of balls. It will take us a while to get it out of our heads, but we need to do it, because we have another match coming,” American setter from Lube, Micah Christenson, had his point of view of some moments of the game.

Recall that Russian Zenit Kazan swept Berlin Recycling Volleys from Germany away in the first semifinal.

F4 in Rome: Atanasijevic knocks it down for a huge celebration of Perugia (VIDEO)

The favourities are Zenit Kazan team