ECH 2017 M: Kovacevic for WoV – “We have very difficult conditions, but we are here to win!

Uros Kovacevic will be under pressure tomorrow night as he has to control the attacks of the World Champions. 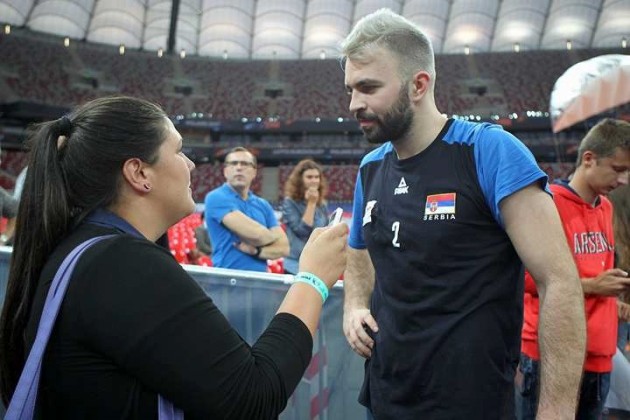 However, he has played a lot of important games and we can say that he has gathered a lot of experience to perform at the highest possible level against one of the best teams in the world.

“I believe that we will win. This is not volleyball in the standard hall that we used to play but whatever… Here in the stadium are very difficult conditions because of the wind, the coldness…. We’ve been preparing for a month and we’re ready to win.”

Will Serbia perform better than in the FIVB World League?

“Sure, we already play much better volleyball than in the World League. At that time, we were all tired of volleyball, after long seasons, some did not even have a day off. It was more difficult from a psychological point of view than the physical one. We did something, we went to the Final Six in Brazil and only two European teams were there and we must be satisfied. We came here more ready for this competition.”

Is it very cold at the stadium?

“Sure it’s hard because it’s colder. If you’re not in the rhythm, you can pick up an injury because it’s really cold, about 18-19 degrees. We got used to it in Curitiba. We are ready for everything: coldness, 70,000 fans and all that make this event even more beautiful.”

Do you think that this is the most important match in the group?

“It’s the most important because if we win all of the games in Pool A, then we will directly go to the quarter-finals, which is one game less and that means a lot. But it’s not a problem if we lose because we will play against World champions on their court,” says Kovacevic.