Serbian team survived Estonia and stayed undefeated in Pool A at the EuroVolley 2017. 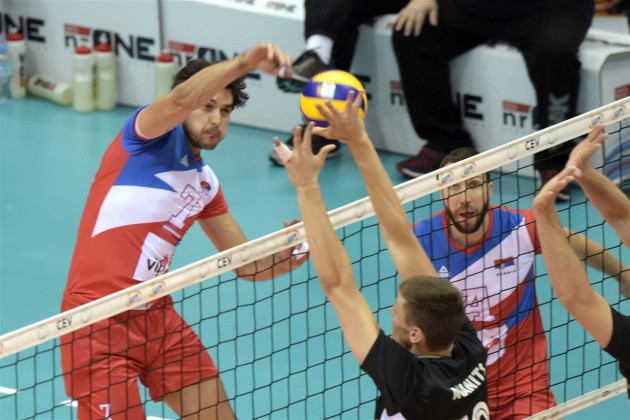 In the second match in Pool, Serbia played with a different lineup than in Warszawa: Jovovic and Atanaasijevic, Kovacevic and Petric (Skundric changed him in the second line), Stankovic and Podrascanin with Majstorovic as a libero.

During the whole first set, Serbia and Estonia played equally. After great start and victory of 3-0 over Poland, Serbian team played without many energy. The result was tight until 18-18 and after good service of Petric, Serbia moved on +2. They had 24-22 and Podrascanin closed this set 25-23.

In the next two sets, Estonia played on the highest level. They dominated on the net and with good power and motivation won them 25-16 and 25-21.

In the fourth set, Serbia again started with the good performances and won it 25-20 while in the tie-break after changing the sides, were unstoppable. Serbia finished set 15-12 after 142 minutes of play.

In the winning team, Uroš Kovačević was the top scorer with 17 points followed by Nemanja Petrić 16 points while in Estonian team Robert Taht scored 19 points and Renee Teppan 17 points.