The last three matches of the 4th Finals in Women’s CEV Cup 2018 were played and in all matches, the guest's teams scored the wins. 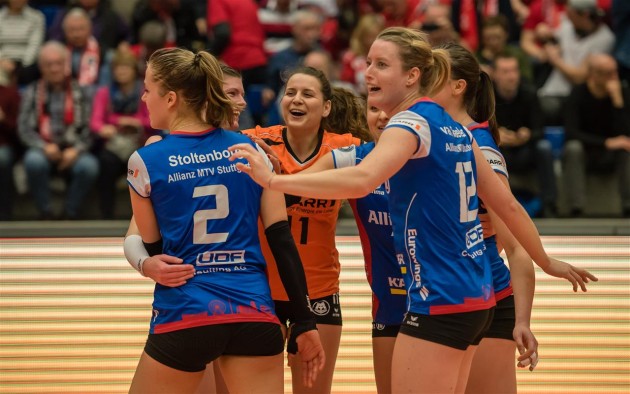 SSC Palmberg Schwerin defeated Pomi Calasamgiore in straight sets (35-33, 25-20, 25-15) after 90 minutes. German team dominated in the block (12 blocks) and from serve line (10 aces) while Louisa Lippmann was the top scorer of the match with 22 points.Jovana Stevanović scored 10 points for Pomi and was the most successful in her team.

In the German derby, Allianz MTV Stuttgart defeated SC Dresdner with 3-0 (25-23, 25-16, 25-17) in front 2500 spectators. Deborah Van Daelen with 16 points and Grace Mallory McCage with 10 points were the best in the winning team while Piia Korhonen scored 17 points for Dresdner.

Minchanka Minsk claimed very important victory against Uralochka after four sets (20-25, 25-20, 25-22, 28-26). The most dramatic moment of the game occurred at the end of the fourth set. The home team saved six (!) match points but Hanna Hryshkevich secured the victory for Minsk. She was the best scorer of the winning team with 22 points while Kseniia Parubets scored 24 points for Uralochka.

LVA M: Ozolnieki sweep RTU in derby to finish regular season as No.2

GER M: There’s no more dilemma – Friedrichshafen seal No.1, improving their record to 17-0

SILVER EL M: Everything will boil with...