CEV announced the number of places in Euro Cups for 2019

The European Volleyball Confederation, (CEV) have announced the number of places for the Federations who will participate in the Euro Cups in 2019.

They used the results during the three years (2015 – 2017) to make the ranking list for the Champions League, CEV Cup and Challenge Cup. 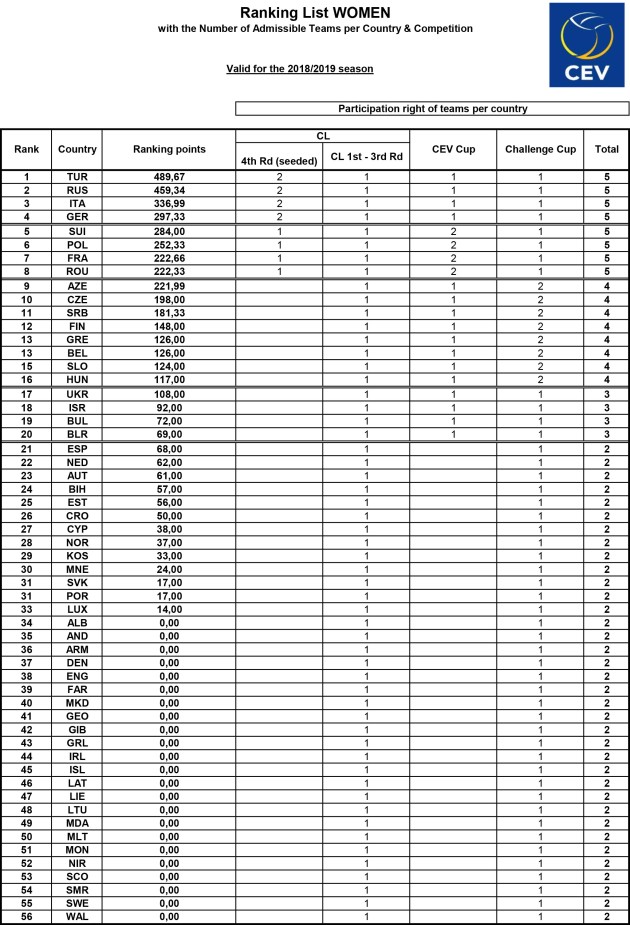 In the group stage of the 2019 Women’s Champions League, the participants will be: two teams from Turkey, Russia, Italy and Germany and one team from Switzerland, Poland, France and Romania. 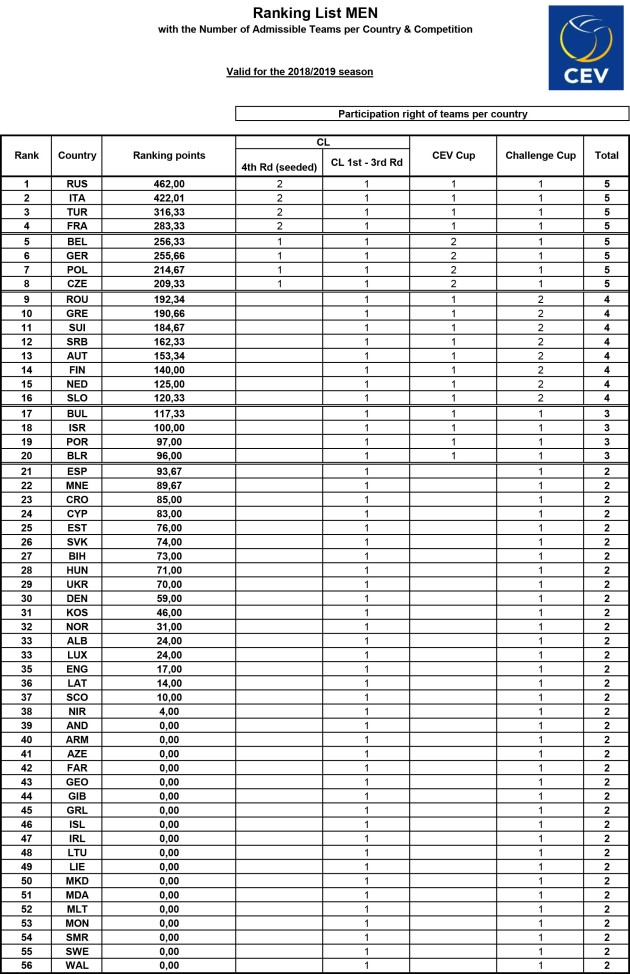 In the men’s volleyball competition, in the group stage of the Champions League 2019 teams will be: two teams from Russia, Italy, Turkey and France and one team from Belgium, Germany, Poland and Czech Republic.

Competition calendar for season 2018/2019 will be announced after a meeting of the CEV Executive Board, to be held on Tuesday, March 13 in Luxembourg.

2 teams from Germany? That can`t happen as they are too weak. And only 2 from Turkey?? What a JOKE.

Re: @Troy you are right, that the distance in budget and strength is rather big behind the top three of Turkey, Russia and Italy before Germany, but Germany is supposed to be anyway the fourth best women’s league in Europe, so the order is correct. That they can hardly finance the CL participation is a pity. And yes, Turkey should get one slot more to ensure participation of all four big Istanbul clubs in CL.

Polish Club didn’t participate in CEV Cup and Challenge cup in recent 2 years. As the result, ranking of Polish League in this list fell sharply although the Polish League is actually regarded as the third strongest league in Europe.

Re: @Polemam
Do you happen to know why they declined to particIpate? The polish league (womens) seems to have lost ground compared to the other strong national championhips. Is there a shortage of money? Even a strong polish side like Rzeszow was soundly beaten by Alba Blaj in this year’s CEVCL. Thanks!

The Polish league advanced 3 teams to the Playoff-12 each year in the Champions League. On the other hand Turkey, Belgium, France and Germany were not like that. So I’m certain that Polish men’s league the third strongest league in Europe behind Russian and Italia league.

In men’s volleyball, Poland league is apparently stronger than that of France, Belgium and Germany. I think the CEV ranking can’t reflect exact power of each league.

Polish clubs must participate in CEV & Challenge cup for reclaiming their position in future.