ECH W: Arnhem is ready for EuroVolley U18

The 2017 edition of the women’s U18 European Championship will take place in Arnhem from April 1 to 9. 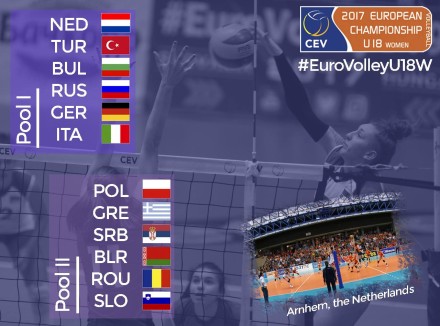 It is the second time in history that the tournament will be held in the Netherlands.

Two years ago Russia claimed the title in a five-set thriller against Serbia.

The 12 participating teams were drawn into two pools of six and will be playing a single round-robin format before the top two qualify for the semi-finals.

Pool I includes the teams from Bulgaria, Germany, Italy, The Netherlands, Russia and Turkey, while Pool II consists of Belarus, Greece, Poland, Romania, Serbia and Slovenia.

The first and second-placed teams after the preliminary round will play crossed semis while those ranked third and fourth will be playing the classification matches 5-8.

All matches as well as all semis and final games of the 2017 CEV U18 Volleyball European Championship – Women will be streamed live and for free on LAOLA1.tv.

Germany and Turkey will open the tournament at 14:00 CET.