MEVZA M: No.1 and No.2 out – Calcit and Final 4 hosts Posojilnica to fight for gold medal

Calcit Volley Kamnik made an upset in the semifinals of the 2017/18 MEVZA men’s volleyball cup. 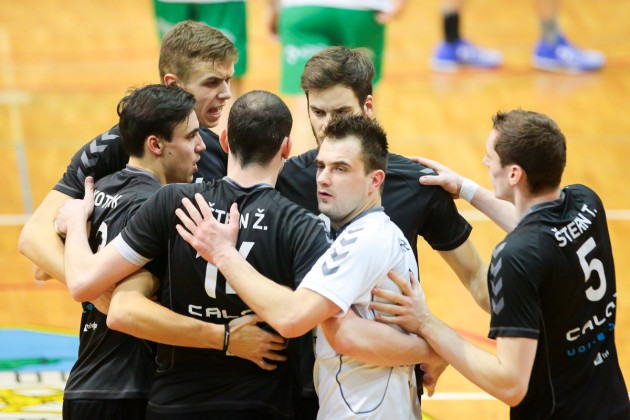 In the Slovenian classic in the semifinals of the regional cup organized by the Middle European Volleyball Zonal Association, No.4 Calcit Volley Kamnik defeated top-seed and a two-time defending champions ACH Volley Ljubljana by a 3-1 (25-22, 25-23, 15-25, 25-20).

The win in the MEVZA Cup in the Final Four in Bleiburg, Austria, was the first of Calcit against ACH Volley this season. They previously suffered three defeats (two times in the national championship and once each in the national cup and regular season of the MEVZA cup). The thing that ACH Volley did not lose a single game in the national championship (18-0 in the regular season and 2-0 in the Final Six) and lost only one in MEVZA cup (9-1) says quite enough on how big this victory of Calcit was.

The Final Four hosts and also No.3, SK Posojilnica AICH/DOB, prevailed against second-seed Mladost Zagreb of Croatia in four sets, partially 25-16, 25-18, 23-25, 25-16 to advance to their fourth-ever tournament gold medal match.

Watched both games. Aich better opponent. ACH and his Head Coach, on of the most arrogant people I have seen in my life, played just like that. Arrogant, bad body language….
Good finale tomorrow in Bleiburg!

PHOTO OF THE DAY: Can volleyball rules...