It’s time to meet the Pool B at the FIVB World Championship 2018 in Japan. Let's take a look at the teams and their rosters, who will start their journey from Sapporo. 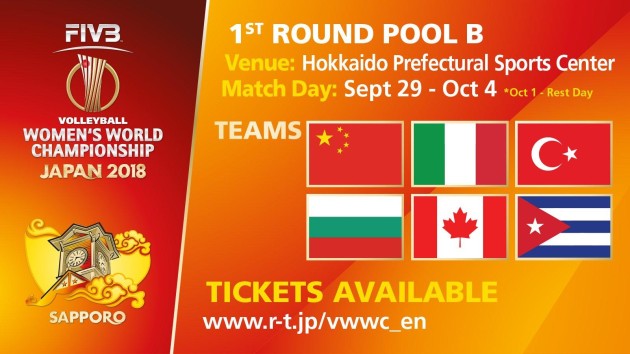 Olympic champions from Rio and two-time world champions China are the most favorite team to take the medal at this years’ World Championship. They are making their 14th appearance at the FIVB World Championship. China won their first gold in the 1982 and in 1986. In the latest edition in Italy, they found themselves once again in the final but were beaten 3-1 by the USA.

China hosted the inaugural edition of the FIVB Volleyball Nations League this year in Nanjing but were knocked out of the semi-finals.

Their oldest player is Ni Yan who has 31 years while the youngest is Yingying Li who has 18. But their most experienced player is Chunlei Zeng who until now played 137 matches.

Team of China for the   World Championship:

Canada have competed eight times at the FIVB World Championship – their best placing so far being 11th, which they have achieved twice (1974, 1982).

Their oldest player is captain Kyla Richey who has 29 years while the youngest is Kiera Van Ryk who has 19 years.

Team of Canada for the World Championship:

Italy have never been absent from an FIVB World Championship since making their debut in 1978. In their ten appearances to date, the Italians have been crowned world champions once, after beating USA in five sets in 2002 final in Berlin. Twice they came close to a bronze, but fell in the third-place playoffs; a 3-0 loss to Serbia & Montenegro 3-0 in 2006 and again in 2014 when they lost 3-2 against Brazil.

In this year’s inaugural FIVB Volleyball Nations League, Italy came close but ultimately missed out on a place in the Final Six, finishing with a 10-5 record.

Their oldest player is captain Serena Ortolani who has 31 years while the youngest is Sarah Luisa Fahr who has 17 years.

Team of Italy for the World Championship:

Since their 2006 debut, Turkey have been present in all editions of the FIVB World Championship. Their best finish was sixth place in 2010 and, in the most recent edition four years ago, Turkey finished ninth.

Turkey took to the world by storm this year in the inaugural FIVB Volleyball Nations League, when they knocked out Brazil 3-0 in the semi-finals, before ending up with silver after losing to USA 3-2 in the final.

Their oldest player is captain Eda Erdem Dundar who has 31 years and is also their most experienced player who until now played 303 matches. The youngest player in Guidetti’s team is Derya Cebecioğlu who has 17 years.

Team of Turkey for the World Championship:

Bulgaria made their FIVB World Championship debut in the inaugural edition of 1952, finishing fourth (amongst eight participants), which remains their best placing to date. Last time around, in 2014 in Italy, they finished 11th. This year, Bulgaria are making their 12th overall appearance in the competition.

Their oldest player is captain Ivelina Monova who has 32 years while their youngest is Monika Krasteva who has 19 years.

Team of Bulgaria for the World Championship

In recent years, they have not achieved great results but have a great history.

Cuba are the third most decorated side in the history of the FIVB World Championship, after Russia (including the USSR) and Japan.

The Caribbean team won its first title in 1978, when they beat Japan 3-0 in the final in Russia. In 1986, Cuba lost to China 3-1 in the final in Prague. But Cuba went on to dominate world volleyball in the last decade of the 20th century, winning two consecutive titles, with a 3-0 victory in 1994 against hosts Brazil in Sao Paulo, followed by another straight-sets success in 1998 over China. Although Cuba have been an ever-present in the World Championship, they have not been on the podium 1998 and will be looking to replicate their glory years when the competition returns to Japan.

In addition to World Championship successes, Cuba have also won three Olympic gold medals – all three coming consecutively at Barcelona 1992, Atlanta 1996 and Sydney 2000, culminating in a golden decade for the sport in Cuba. They finished third for bronze four years later at Athens 2004.

Their oldest player is Egli Sabin Terri who has 26 years while their youngest is Yaimaris De Los Angeles who has 15 years.

Unfortunately we do not have the composition of Cuba of 14 players.

Krystle Esdelle, the lefty queen from Trinidad and Tobago

The setter with a great potential – Cansu Ozbay

FIVB on new doping report: „We will...