For the first time in the history, Serbia will play in the final of the FIVB Women's Volleyball World Championship! 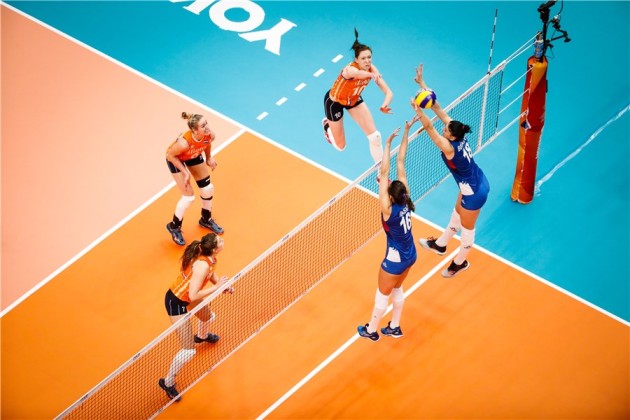 The Serbian duo Tijana Boskovic – Brankica Mihajlovic was at a high level, destroying the defense of the Netherlands…

Serbia opened the game by playing well in the first set. However, we saw an answer from the Dutch girls in the second set, delivering a real volleyball show to the fans and playing an extended set.

In the third set, the Dutch girls continued with a good display, creating a 5-0 scoring run and setting the lead 9-4! However, Tijana Boskovic started sending rocket balls to the other side, destroying the reception of the Dutch girls and in the end, Serbia won this part of the game by six points of advantage.

We have been witnessing the similar situation at the beginning of the fourth set, but the role has been changed. Serbia now created a big lead, 8-3, however, Morrison’s side reduced it and even took the lead, changing the pace of the game.

However, Maja Ognjenovic made some important blocks, Brankica Mihajlovic scored some points from the difficult situations, Tijana Boskovic pushed to the limits, as well as the other players in defense and that paid off by advancing to the final!

“It was a difficult game, both teams played amazing volleyball. There were a lot of good defensive moves. We were more patient than the Dutch girls. We prepared very well, we were motivated, and it was a good job. We will just now prepare for the final, if China comes, we would like to take a revenge on them. We will see. Thank you fans as well,” says the captain of Serbia Maja Ognjenovic.

The top scorer of the game was Tijana Boskovic with 29 points, Brankica Mihajlovic added 23, while on the other side Lonneke Sloetjes finished the game with 23 points.

Serbia will play in the final tomorrow at 12:40, while the Netherlands will battle for a bronze…