The winners of the 2018 FIVB Men’s Nations League will undoubtedly find themselves in the history of volleyball knowing the fact this is an inaugural edition of the tournament that replaced FIVB World League. The climax is just several days away, as Stade Pierre-Mauroy in Lille is about to host the Final Six from July 4 to July 8. 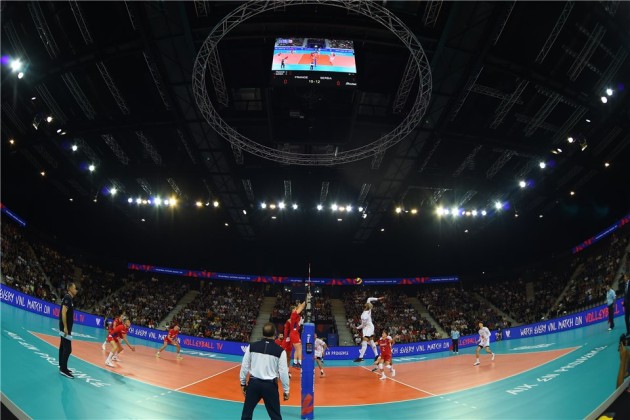 POOL A: France, Serbia, and Brazil

France had nearly flawless Pool stage campaign (12-3), showing a lot of confidence and finishing the top of the standings despite the fact they punched an automatic ticket for the Final Six as the hosts. But, this is all past for „Les Bleus“ because, in the final tournament, every single mistake and lack of focus will be punished. That’s why France head coach Laurent Tillie decided to rely on experienced and proven forces at Lille tournament.

Including both the FIVB World League and its successor Nations League, France have qualified for their fourth final tournament in a row.

“It doesn’t mean that you will win the next day because you won the day before. The clock is reset. We played Brazil when they had some injured players. They will recover for the Finals and it will change the game. Brazil is a team that has won everything and who, almost every year, wins a title, so we know it will be very complicated. The same thing is for Serbia which were a bit in the abyss when we faced them in Aix-en-Provence. They have recovered since then. For me, it is the team of the present and the future with confirmed players, very good young guys. They are physically and technically very strong,” France head coach Tillie stressed the qualities of his team’s rivals in Lille, Brazil and Serbia.

Serbia belong to the group of the less fortunate teams when it comes to the tournament’s closure as they won only one gold medal (2016) in six final matches which they played (World League). They finished pool stage as No.4 (11-4).

“Many things are open because, during the entire Nations League, a lot of national teams showed a variable form and no one had enough time to fully prepare and compose itself for this kind of effort. I’m optimist before the first two games. Our ambitions are always the greatest,” Serbia head coach Nikola Grbić said upon announcing the roster for the Final Six: Nikola Jovović, Ivan Kostić, Aleksandar Atanasijević, Dražen Luburić, Nikola Rosić, Neven Majstorović, Marko Podraščanin, Srećko Lisinac, Petar Krsmanović, Aleksandar Okolić, Marko Ivović, Uroš Kovačević, Milan Katić, and Nikola Mijailović.

The most-titled team in the Nations League’s predecessor World League (9 gold medals) and medal table leaders (20 medals) Brazil secured their berth in the Final Six in the penultimate round of the Pool stage only as No.5 (10-5), showing many weaknesses and even had a three-game losing streak at the end of Week 4 which did not happen to them on a world level in six years. Good news for the fans of “Seleção” is a return of a middle blocker Maurício Souza who recovered from an abdominal muscle injury which he sustained before the beginning of Week 4. Brazil head coach Renan Dal Zotto kept the base of players that helped Brazil punch ticket for the Finals in the last Week of an Intercontinental stage: Bruninho, William, Wallace, Evandro, Lucão, Maurício Souza, Éder, Isac, Maurício Borges, Lucas Lóh, Douglas, Victor Cardoso, Murilo, and Thales.

See the schedule and timetable for the Final Six.

POOL B – Russia, USA, and Poland

Russia finished an intense and exhausting Pool stage of the tournament by securing the Final Six berth two rounds before the end, even having a chance to compete for the top spot in the last round. Unfortunately for “Zbornaya” fans, they lost to France. Claiming No.2 (11-4) was a huge success to Russia knowing the fact their head coach Sergey Shlyapnikov decided to rest several key players for the 2018 FIVB World Championship such as Aleksandr Butko, Sergey Grankin, and Yuriy Berezhko, while he did not expose players like Maksim Mikhailov and Artem Volvich too much. Good news is that Dmitriy Volkov and Dimitriy Muserskiy no longer have health issues and injury problems which they suffered in Week 5.

The current world champion Poland was the last team to progress to the Final Six thanks to beating Australia in the last round. Thus, they claimed No.6 (10-5).

“The group has been with me for 40 days. I must say that I like this job for now, though I don’t know if my work pleases the team. I’d rather not say it to them, but at the beginning, I was wondering if they would be motivated. Now I don’t have any doubts about it, it turned out fantastic. We are constantly getting to know each other. There’s still a long way to go, but the start is not too bad,” Poland head coach Vital Heynen said after returning home from the last Week of the Intercontinental round, leaving some room for jokes as usual when it comes to him. He will take 15 players to Lille tournament: Fabian Drzyzga, Grzegorz Łomacz, Michał Żurek, Paweł Zatorski, Damian Schulz, Bartosz Kurek, Maciej Muzaj, Bartłomiej Lemański, Mateusz Bieniek, Jakub Kochanowski, Mateusz Mika, Aleksander Śliwka, Bartosz Bednorz, Bartosz Kwolek, and Artur Szalpuk. Mateusz Mika will miss the Finals as he recovers from an appendectomy.