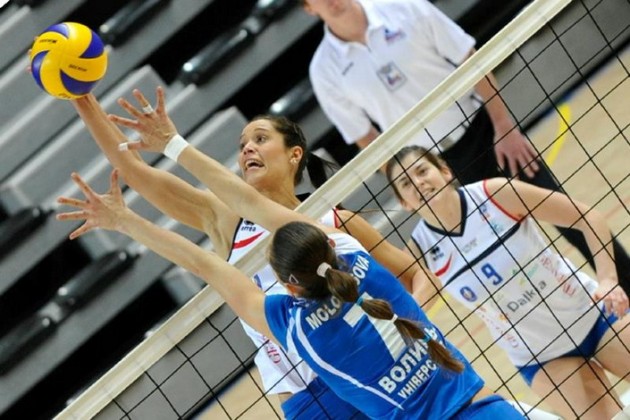 It is certainly going to be another tight French season, with many teams strengthening and reinforcing.

Both players stated exclusively for us that due to the latest financial and administrative situation they decided to stop playing for Stella.

“I speak about CALAIS with great sadness. As everyone knows, the strength of our team has always been the union, the collective. Just us, players and technical staff know how hard was this season and how we struggle to obtain each victory. So, it was very bad to see our group unravelling. Probably if CALAIS didn’t have so many administrative problems and we didn’t lose our 9 points, would have probably reached the finals and continued to work with new goals for next season, playing the Champions League etc.. But it is past now. We have to move on and seek what is best for each one of us”, stated Keylla. “I’ll miss CALAIS a lot. I felt good there, in and out of court. I was warmly welcomed by the people who work for the club and fans. I felt good and that’s very important to athlete’s mental. Working with the technical staff and the entire team was an amazing experience. I will always remember everyone dearly!”

“I managed to accomplish many important things both for me and for CALAIS. Unfortunately, it didn’t end the way I imagined” said Tamara Hoffmann.

Both Keylla and Tamara had other options, but in the end they decided to be part of Pays d’Aix Venelles Volley-Ball project the next season.

Keylla Fabrino: “Yes, it’s true. For the next season I will be part of the team Venelles. I took this decision and I am very happy with my choice. For the upcoming season, I want to continue improving and therefore help the team get as far as possible in the regular season. I’m very excited about the team we are building and also with the opportunity to work with Hippo. I believe we have all the conditions to qualify the club to an European Cup”

Tamara Hoffmann: “I chose Venelles as I have confidence that here I can keep improving my game, especially that I’m going to work with people I already know. I has proposals from France and Brazil, but I’m very happy with my choice and that I’m going to keep playing in the French league I hope I can make a better season than the previous one and that I’ll be able to get up to the club’s expectation and goals.”

To read more news from this competition click on France.