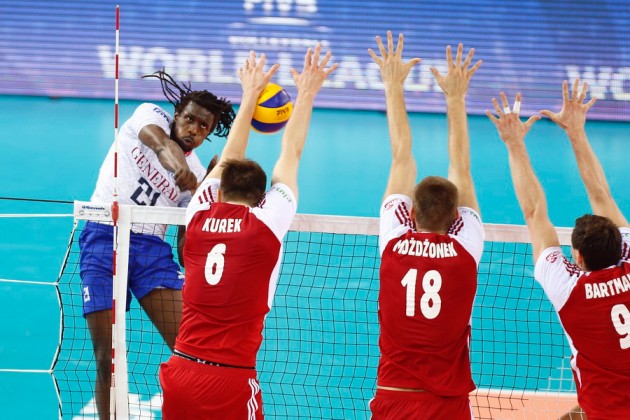 With no victories since the beginning of the 2013 World League, France and Poland shared a common goal while competing in Rouen on Friday night: securing a first win.

Playing in a loud KinderArena packed with a mix of French and Polish fans, France started the game in a very clean and efficient. France led the first set from the beginning. French head coach Laurent Tillie chose former Brasilian Rafael Redwitz as first setter. France took a fast start, to lead 8-7, then 16-14, to finally conclude the set 25-23 in 35 minutes.

But, as expected, Poland reacted as the Polish typically do, with a strong serve and a solid block. Poland needed 30 minutes to tie the game 25-21. They then looked just as impressive in the third set, winning 25-22.

The fourth set started exactly the same way, with Poland leading and the young French team forced to fight on every single point just to stay alive. At 16-11, Poland seemed destined for their first success in the World League. But France, pushed by an enthusiastic crowd, decided to show how talended they can be on a volleyball coard. Leaded by their setter and captain, the young Benjamin Toniutti, who served 2 aces, France survived to tie the game 25-21.

The tie-break was all blue. France sped to the lead like a sport car, driven by Earvin Ngapeth, the team’s leading scorer with 20 points. Poland could not recover. France needed only two match points to conclude the game 15-11, with Earvin Ngapeth clinching the set with a decisive spike.

Winner of the World League last year, Poland lost their third game in a row. For France, this victory came at the best time, after two defeat at home against Bulgaria and then two more on the road against Team USA.

France and Poland will face again on Sunday night in Toulouse.