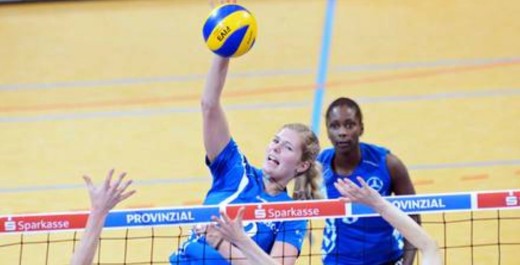 Game started with a minute of silence for Gerhard Fidelak a longtime champion coach who passed away during the weekend.

The first set started tied are 6:6. That’s when Schweriner SC‘s series began, launched by Quinta Steenbergen. After that it was 20:11 for SSC. Teun Buijs played Sthefanie Tiele and Tanja Joachim instead of Lucia Hatinova and Denise Hanke. Alemannia Aachen managed to score some points, but SCC easily won the first set 25:19.

In the second set, the guests defended themselves well, but SCC managed to win it in the end 25:18.

The third was onesided game, and Schweriner finished the match in 77 minutes.