US American libero Kayla Banwarth joined the likes of DRESDNER SC this past November 13 and the talented player says her major goal is the participation in the next Olympics coming up in about four years in Rio de Janeiro. This and other volleyball news read on Worldofvolley.com. 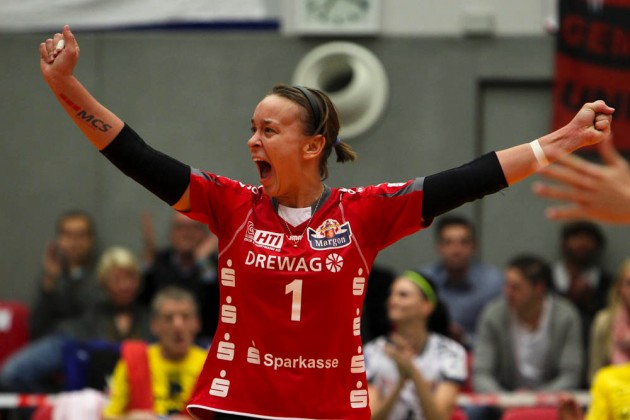 After playing a few rounds of the Bundesliga and starring in the CEV Volleyball Champions League, Kayla shares her impressions about her European debut: “The Bundesliga is an excellent league with many great players. However, I think that our team has got the opportunity to win the league at the end of the season and I’ll do my best to help the club achieve this goal”.
DRESDNER SC missed out on a spot for the next stage of the 2013 CEV Volleyball Champions League and has been eliminated also from the run for Germany’s national cup. However, as her side edged Azerrail BAKU in the last round of the prelims, Banwarth could celebrate her first win in Europe’s most elitist club competition. “We have to accept some defeats but I think that this will also motivate us work hard every day. Things will work out if we continue to train hard and do not lose our focus. This team has already been able to deal with adversity as we have been sidelined by many injuries since the start of the season. These are the moments where a team reveals its real character. I believe we’ll fight back and find our way to win. This is my goal every time I step onto the court. I know I have been here only for a short time but I want to help this club show its very best, gain confidence and win every single match we play”.

Banwarth definitely likes the atmosphere contributed by the local fans there in Dresden. “I love the crowds we get at our matches. The fans here in Dresden create an amazing atmosphere so we all have fun playing our home matches. If you have a full arena on your side, this can certainly make the difference in determining the fate of the match”.
Banwarth won’t have the chance to fly home even for Christmas: “Of course I do miss my family and friends. The culture here in Germany is so different that there are many things I miss of the States. But I simply have to get used to a different environment”.

She started learning the ABC of Volleyball when she was only 4. “I joined my first team when I was 7. My parents had both played Volleyball and they got me interested in the game. I can hardly imagine what my life would be without Volleyball. I just love competing; when you are on a team it means that you are part of something bigger than yourself. It takes a lot of emotional investment to be on a team but this can be paid back by some very special moments and memories”.

Banwarth was originally playing as outside hitter while attending high school in the US but when she moved to collegiate Volleyball, she realized she was a little too short for this position. “I knew that if I wanted to join the highest division of collegiate sport my only option was to play as libero. As soon as I made the switch, I literally fell in love with this position”.   She does not feel like being disregarded by the audience as she does not score any points. “It can be disappointing that the libero does not get the recognition he deserves especially as we all work very hard to be great in what we do. However, my dad always said that “good things come to those who wait”. So I’ll keep working hard and believe that one day it will pay off”.

Banwarth had a splendid collegiate career with the University of Nebraska and feels it is an honor to be a member of the US national team. “My main goal in Volleyball is to participate in the next edition of the Olympics in Rio. This is the goal I will be working for in the next four years. It is also important that what I am doing makes me happy. I want to be an inspired person. My family and my friends mean the world to me”.

Kayla finally describes herself in a few words: “I am laid-back, quiet, shy when I first meet people, but also a true competitor who is passionate about everything I do. I love inspiration and being inspired and I am the person that would rather curl up and watch a movie than go out for the whole night”.

GBR: British Volleyball on the ropes after funding is cut by UK Sport