They played many games together in the national team, Max Gunthor (VfB FRIEDRICHSHAFEN) and Robert Kromm (BERLIN Recycling Volleys), will meet as opponents in the Bundesliga finals. They shared their thoughts before the game. 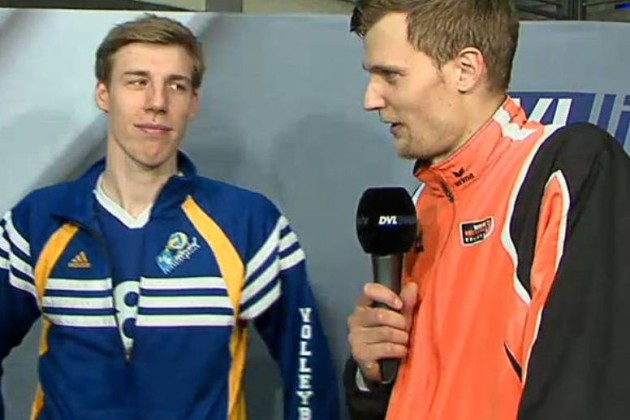 – Robert, after a sovereign main round you had a solid play-offs. How satisfied are you with the season so far?

– Robert Kromm: So far we have played a very successful season and presented well, especially in the Champions League. We qualified for the finals again and reached an important goal. Now we want the title!

– Max, after a streaky main round you have been playing impressive in the play-offs against Evivo DUREN and Generali Unterhaching. How do you explain the enormous increase in performance of the team?

– Max Günthör: When Sebastian Krause and Valentine Bratoev came, they brought new self-confidence and also strengthened the team. We played great against DUREN and this showed we are capable of winning.

– Everyone who loves volleyball in Germany is looking forward to the “dream final” between BERLIN and FRIEDRICHSHAFEN. The experts expect a balanced and exciting final series. Where do you see the strengths and the weaknesses of the opponent?

– Günthör: I think BERLIN is a slight favorite. They were very confident in the Bundesliga and have shown impressive games against KAZAN in the Champions League. However, I hope that we can increase our game as in the semi-finals and give the fans an exciting finale.

– Kromm: I think that it is a difficult task. It will certainly be a long and hard fight, but I’m optimistic. Our team is a strong unit and together we have won some tough games.

– Max, with Generali Unterhaching you’ve already faced BR Volleys in the play-off final last season. Can you help them with your experience this year?

– Günthör: I remember I did not like the situation last year and it’s actually been deleted from memory.

– Robert, you have already won the championship in a dramatic final series against VfB Friedrichshafen in 2004 with SCC BERLIN. Will this experience have an impact on the current finals against VfB?

– Kromm: It’s been a very long time. But I remember the motivation, which brings with it such a success.

– What you think might be the deciding factor in the final series in 2013?

– Günthör: I believe that the inspiration will be the central element. The team that’s in better form will have a slight advantage in every game.

– Kromm: We are a stronger unit. Not only the team but also our home fans.