With a clear victory of 3-0 (25-19-23-21, 1:18) against the EnBW TV Rottenburg ,Moerser SC secured the 4.place on the scoreboard- and also wants to keep this position up to the play-offs. In a rather moderate game Rottenburg did not use the chance to win the second set, thus leaving the initiative and victory to the very renewed team of MSC. 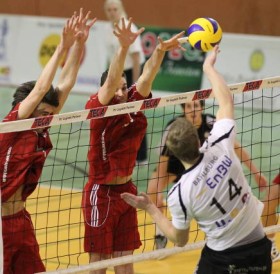 MSC coach Chang Cheng Liu had – unlike in previous situations- sent highly renewed team onto the court: Tobias Neumann and Marvin Prolingheuer passing diagonally, and Janis Smedins and Ewoud Gommans in receiving and Renzo Verschuren and Oskar Klingner in the middle. On the position of libero was Tom Weber – all played artistically. “This is the youngest team, the MSC has ever had,” said the still injured Henning Wegter.

Moers dominated from the start, quickly moved ahead with 8-4 and 16-11, making the coach of the team Rottenburg, Müller-Angstenberger to take timout, at the result of19-13 and 22-17 .Moers is not overpowering, but Rottenburg is insecure and with too many errors.

This changed at the beginning of the 2nd set: Moers now with errors (errors in the attack – or harmless) and in the first break from Liu at 3-6. Then with a spurt of 8-6 Moers took the lead. However, again with   9 points, they balanced the result – so, Rottenburg responded  with a timeout. In the second set Moers had the lead of 2 points. Again, with 19 points, Prolingheuer asked for the technical timeout  when the result was 19-20 for the guests. The guests are now a little stronger, with a mortar attack won 21-23. Then finally Smedins with a nice backcourt attacks Rottenburg with “first goal” and then tentatively Moers benefited from the set.

In the 3rd set with 4-4 Moers secured a permanent leadership. Sensational game with two great defenses on mortar side of Moers and then point again – applause and enthusiastic comments of the speaker’s hall: “Volleyball at its best!” After much home mastery of the players; the set was on one side, although with the result of 12-9 and 15-10 for Rottenburg. Moers ensures the end of the game.

It was a quite modest, yet entertaining game with two great sets , which appealed particularly to the approximately 450 spectators. Moers was variable and effective in attack – even in the block, the “Eagle” was vigilant. Rottenburg on the relatively weak external positions … could not develop enough pressure left on the court and missed extra security. The Coach Müller-Angstenberger changed  a number of players in order to create relief.

The coach Müller-Angstenberger said afterward. “We now have lost a great deal of self-awareness  and are running behind success. The loss of the 2nd set can explain everything -playing was beautifully presented, then at the end without faults and guts and Moers were confident to win the set. We are still pursuing the first position against Moers, where we lost 2-0 and 17-11 leading to even 13-15. Since then, confidence and stamina have gone. “

MSC coach Liu Chang Cheng announced afterwards: “The young players have done their job very well. In the 2nd set they have may not been always concentrated , but have shown self-confidence. It is good to know that we can compete not only with the experienced players – we are a team. Tobias Neumann and Marvin Prolingheuer have done their work very well today. “
Falko Steinke and Janis Smedins were called for the MVP award.