There is no need that Jaromir Zachrich has to say something. His facial expression after the game spoke for itself. The captain Eviva Dueren and his teammates were very disappointment 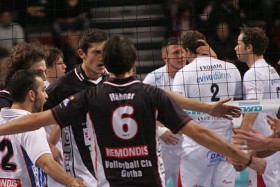 After this defeat coach Söhnke Hinz said that his players are to strong than their lowest level. The pattern of failure is always the same. Duren plays well, but when they make a lot of mistakes they can not find the way to return back in the game. That was the situation in the first set. Evivo Duren started very strongly. Service, block, defense and attack – everything fits. They played at the highest level

Gotha was simply without chance and opportunity. Düren strongly pulled to 16:8. That was thanks to Tomas Kocian who leaded the game from the start. Then Evivo made two or three easy mistakes and lost their energy and the team becomes significantly uncertain. Gotha took a moment to regain the aggressive play of without errors. But they lost first set with 23:25

In the following two sets of Düren was initially conducted. But the team could not keep that level. They made errors. Instead of energetically played thill the end of the set they lost their energy. That was leaded opponents to win because they were more stable and produces fewer errors.

“We certainly will not stop playing volleyball. Dueren is certainly not yet at the end. Faith in arguably high potential of the young team is great. So Evivo will prepare for the next game coming Wednesday at home with much more enthusiasm.” explained coach Söhnke Hinz.