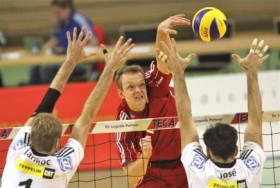 Moerser did not knew to exploit the weaknesses of Friedrichshafen so they finished the match with selebrating in only 2 sets.

MSC coach Chang Cheng Liu, started with the Van Gendt (setter) and Olieman (opposite), Keir and Smedins on reception, Broshog and with Klingner in the middle. Rodriguez was on libero position.

They made three mistakes in a row that led to 1-3 and Liu wanted the first timeout. Uncertain reception and especially the weak attack led to the 5-8 and 8-16 to the trailing 10-19. At 8-15 Tobias Neumann came in the game. Coach Moculescu wanted another timeout at 21-24, but the final score of the first set was 21-25.