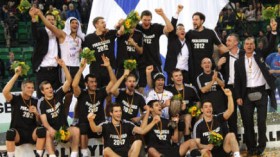 It was the eleventh Cup victory for the team of Stelian Moculescu. The best scorers were Christian Dünnes (14) for Haching, and Oliver Venno and Idi Lima Martins, each with twelve points for Friedrichshafen.

Both teams had been preparing specifically for the game and were highly focused.

In the first set Haching, champions of the past three years kept the lead of: 8:6, 16:12 and from 21:19 the team of the coach Mihai Paduretu took the lead.

“We had enough chances to win the set,” said the captain of Hachings, Max Günthör. But the attack of Juraj Zlatko of Friedrichshafen scored with 25:23 and cracked the defense of Hachings.

The second and the set t ended with 25:20 in the favour of Friedrichshafen.
The coach of Hachings, Mihai Paduretu quickly stated: “It was not our day. The difference between us and Friedrichshafen was clear.”

Paduretu had only to congratulate his Romanian compatriot Stelian Moculescu: “The victory for VfB’s absolutely right. But we hope that we can return the favor in the play-offs. “

Max Günthör, in his seventh Cup final in a row since 2006 as the” king of Halle ” said: ” We started well in the first set and if we had won that set, we would play the game differently. “

Marcus Bohme, the middle blocker of VfB said: “Despite the 3:0 victory, it was a very tough game. We were very well prepared. We were very focused, and it was a good day for each of us.”

Serbian libero of VfB, Nikola Rosic, was equally happy: “Today was my fourth final in the GERRY WEBER STADIUM, and I have finally won for the first time. I am happy for the team and the club and I think we deserved the victory today.“

The coach of Friedrichshafen Stelian Moculescu said: “I congratulate the team. It has iimproved during the year.” He subscribe the success to young players, Juraj Zatko and Oliver Venno. Zatko after the finale was awarded MVP.

“In the first set Haching played very well. In addition, we had luck in service. After that, we have increased our block and defense, where Zlatko was outstanding. Crucial in these games is to make big points. Thus, we won the trophy after four years,” added Stelian.

FRA: Tours lost, Poitiers on top, Lyon in B League