The German champions SC Schwerin has enriched its impressive trophy collection with another title. 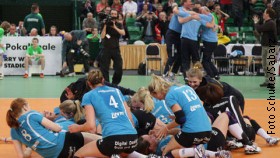 In front of 10 200 spectators the  successfulplayer Mira Topic (20 points) scored the third match point from attack.

Coach Guillermo Gallardo looked despairingly: “My team had less experience than Schwerin in front of this crowd, as was seen at the beginning of the game.”

The middle blocker of Schwerin, Berit Kauffeldt, said also: “Our good serve was the key to success, thus they could not stand fast playing.”

Only in 3. set Vilsbiburg become accustomed to the atmosphere.
With 12:4 and 16:8 guidance they seemed to be on a clear course toward winning the set. But Schwerin fought back, at least to even the result 22:22.
However, Vilsbiburg managed win the set with 25:23.

The fourth set was not dramatic with 9:6 and 20:17 lead for Schwerin.
Sara Petrausch, the junior world champion of national team, managed a series of leadership for Raben with23:20.
Then Anja Brandt with her great impacts brought her team forward again to 24:23.
Schweriner won the last set with 27:25.

Lisa Thomsen of Schwerin tried to describe her feeling: “I am so happy, it was my first big final where I played from the beginning. It was a frustrating game. Tomorrow we will celebrate with the fans.“

The coach, Teun Buijs, whose daughter Anne was chosen MVP of the game, said: “That was a real cup final, both teams have struggled unbelievably. In the first two sets our charge has made the difference. In the third and fourth set  Vilsbiburg has come back very strong in defense and attack. Fortunately, Anja Brandt played excellent at the end.

The captain Julia Retzlaff said: ” It is the absolute highlight for all league players. We have used the energy of the hall and enjoyed every point – it was easy.”

The coach Gallardo of Raben said: “Schwerin was individually better and therefore it is a worthy winner.”