The moment of truth has come. On weekend begins play - off round of volleyball league. 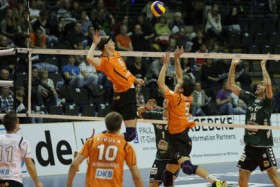 Eight teams will compete in the final phase of the season.
BERLIN RECYCLING Volleys on Saturday evening (March 10, 19:30h) will meet with local rivals Netzhoppers KW Bestensee in the first quarterfinal game in the Max – Schmeling – Halle.

“It is clear that we are expecting a very important game”, said Mark Lebedev, the coach of Volleys before the first match against Netzhoppers.

He also added: “Now it is all or nothing. So I am sure it will be a very emotional and tough game. Particularly strong performance in the last match would give the power to Netzhoppers on Saturday.”

“We have shown ourselves that Berlin can play well under adverse conditions “, said the coach Mirko Culic satisfied with the development of his team.

He also commented on the following match: “The motto “Victory or defeat ” does not refer to us as outsiders in the quarterfinals.
It guarantees us at least six other phrases from the top German team, which will give our young team a further boost.”

The duel on Saturday will be the playoff debut, because before BR Volleys and Netzhoppers KW Bestensee met only during the main round of the Bundesliga.

Australian Lebedev Mark looks forward to this encounter glad. “The fact that we meet in the quarterfinals with Netzhoppers is obviously great. A derby always has a unique character. That makes the game interesting and exciting for spectators.
I hope that tomorrow many spectators will see that kind of game. “

Generali UNTERHACHING is back on track after...