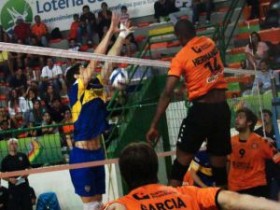 Boca was very strong in reception with Nicolas Uriarte and Marcos Dominguez in attack. The guests took the lead of 8:12, but BAU got better in service and defense. Still, with the initiative and less errors, “Boca Juniors” established control and won the set with 2 points difference.

The siuation changed completely in 2. set. The service and block were very important for a supreme start (9:3).

Juan Ignacio Finoli, Milinkovic and Garcia showed excellent performance. Boca increased their mistakes and the advantage was extended comfortably (14:7 and 21:14). The positive attack of Mariano Giustiniano led to the set ball (24:18) for BAU.

In 3. set , after the initial equality (3:3) Boca demonstrated advantage 7:10. Thanks to great defense, the team led by Marcello Gigante took control over the game. Although Milinkovic and Ihosvany Hernandez tried to change the result, Boca got better and ended the set with the block of Maximilian Gauna.

The fourth set began evenly 5:5. However, Boca made two mistakes in a row and BAU was leading 8:5 to the first technical timeout. It edned the set in its favor with 25:19.

In tiebreak Nicolas Bruno evened the result 8:8, until Andre Radtke scored 11:9. The direct point by Milinkovic and an error from the service of John Paul Hatrick declared the victory for BAU.