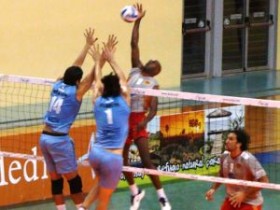 Scholtis of La Union de Formosa with 13 points and Joel Dos Santos of Sarimento Santana Textiles with 14 were the scorers of the match.

In 1. set, after 22 points, Formosa took the lead and ended up winning the set with 26:24 thanks to the point of Scholtis.

Sarmiento had a good start in 2. set. However, it could not sustain the intensity of the rival that had the control over the game until the end of the set.

Formosa continued improving in reception and block and won the set supremely with 25:18. The centers Sanchez and Peralta provided the most important points for Formosa.

In 3. set, the game was played point by point. However, Formosa showed its determination and won the set with 25:22, thus ending the match.