Germany’s TV Ingersoll BÜHL have turned their first participation in the European Cups into some kind of a fairy tale, especially after edging past Italy’s standout Bre Banca Lannutti CUNEO shortly before the holiday season to continue their triumphal march with another two victories over PAOK THESSALONIKI to make the Challenge Round of the 2014 CEV Volleyball Cup – Men. 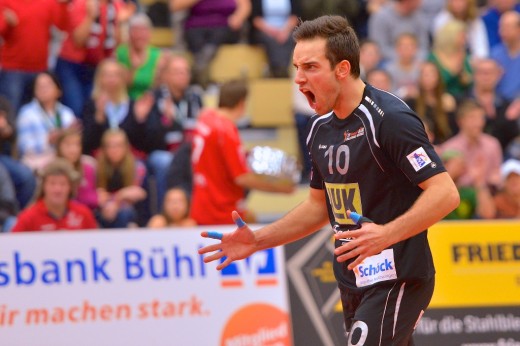 22-year old wing-spiker Björn Höhne who just moved to Bühl before the start of the current season shares his thoughts and feelings drawing the line after a series of matches where his contribution was also instrumental to his team’s success.

“We are a very young team whose members are willing to work hard and never give up” he says. “We fought hard so far in this competition, and especially as we crossed our ways with CUNEO in the 1/8 finals. What we have achieved stands out as some of the biggest achievements in the club’s history and we will do whatever it takes in order to continue our journey in the CEV Volleyball Cup.”

TV Ingersoll had first lost the home match with the silver medallists from last year’s CEV Volleyball Champions League Bre Banca Lannutti CUNEO but then stormed back to claim the return game in Italy and also the golden set that followed. This way they caused one of the major sensations in this year’s European Cups.

“We had a lot of respect for our opponent but we nevertheless all believed that a victory was within our reach” Höhne recalls. “I think that they probably underestimated us in the first game we played here in Bühl and this made us aware that we would stand a chance in Italy. That game was incredible; it was a strenuous fight with many great points from every player,” he adds.

After edging past PAOK THESSALONIKI in the 1/4 finals, TV Ingersoll will be playing PARIS Volley in the Challenge Round. This team comes down from the prelims of the 2014 CEV DenizBank Volleyball Champions League where they ended up in third place in Pool C after standing a chance to make the Playoffs up to the last round of the prelims.

“The upcoming match with PARIS Volley is going to be one of the toughest challenges for us so far because they have excellent players and they have had a fantastic season this year. We are expecting a very difficult game both at home and away” Höhne predicts.

Björn is a two-time national champion with his former team, the BERLIN Recycling Volleys, where he spent two seasons after starting playing in the first division of the Bundesliga for another team from his home town, VCO BERLIN.

“I do not regret the decision to move to Bühl even though at the beginning it was quite a big change to be away from home. This season I wanted to learn what it takes to bear responsibility for a team that is among the top four in our national league and I think that up to now I have achieved this goal” Höhne explains. “We are doing something really big for this small town.”

Höhne was among the players who represented Germany at the 2010 Junior European Championship in Belarus and one year later also at the FIVB Men’s U21 World Champs in Brazil.

“Well, since the very first day I started playing Volleyball back in 2006, I knew that one day I would have played professionally. Starting from these early days, I have taken it step by step to turn this dream into reality.”

“That was a dream come true. After spending a difficult year in Berlin with the Recycling Volleys, I was given a chance by our head coach Vital Heynen. I am grateful to my friends and my family for all their support because with their help I could continue to work hard and stand the difficulties that I have found along the way.”

Björn recalls some memories from the days he spent in Gdynia and Gdansk with the national team as Germany started out the tournament with a phenomenal straight victory over 2012 Olympic champions Russia before losing to Bulgaria in the 1/4 finals.

“The team played very well up to that point. However, the core of the group is relatively young and on that day our opponents from Bulgaria were mentally stronger.”

Though in early January he was not among those who delighted the home crowd in Ludwigsburg with three straight victories to make the Final Round of the FIVB Volleyball World Championship Poland 2014, Höhne followed the actions of his friends very closely:

“This year our team is hungry for a medal and everyone is willing to give whatever it takes to achieve this goal.”