Germany was expected to play a couple of friendly matches with the Netherlands this coming April 26 and 27 to complete a training camp currently taking place in Maaseik, Belgium, while preparing for the Olympic qualifier scheduled for May 8-13 in Sofia but the “Oranjes” just called off this double duel thereby leaving the side mentored by head coach Vital Heynen without any real test prior to their travel to Bulgaria. 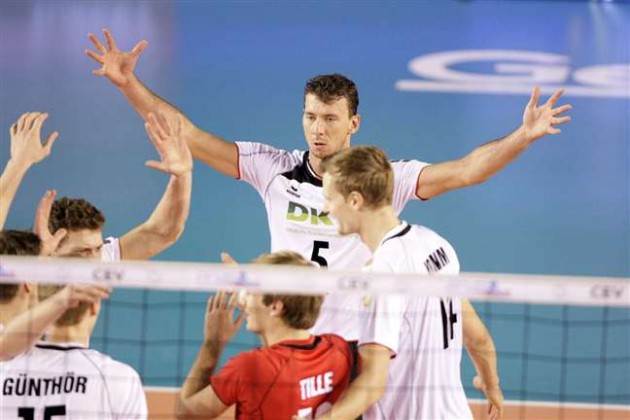 The group around team captain Björn Andrae (pictured) will hence proceed directly to the next stage of their preparations by enjoying a series of joint training sessions with Slovenia’s national team at “Olympiastützpunkt” in Heildeberg.

Head coach Heynen has openly invited all fans as well as the media representative to show up there in Heidelberg where the group will be joined also by Georg Grozer who recently stood out in the finals of Poland’s national league with Asseco Resovia RZESZOW, scoring a total of 31 points including 4 blocks and 4 aces in the last game of the Championship series with PGE Skra BELCHATOW.

“Georg is a bit late in resuming training together with our group as he has some administrative issues to comply with since this coming fall he will be moving to Russia to play there for Lokomotiv BELGOROD” says assistant coach Ralph Bergmann.

A total of 16 players will join the camp in Heidelberg but only 12 will be retained by head coach Heynen for the Olympic qualifier in Sofia where Germany will open its campaign for an Olympic pass by playing Slovakia first and then follow with two more preliminary matches with Finland and the 2011 European silver medalists of Italy.

CEV W: Women’s European Championship back to Germany after more than 20 years