CEV W: Women’s European Championship back to Germany after more than 20 years

Germany’s Organizing Committee for the 2013 CEV Volleyball European Championship – Women that will be co-hosted with Switzerland and will run through September 6-14, 2013 got together today at the premises of the German Volleyball Federation (DVV) in Frankfurt with CEV Vice President and Chairman of the Jury, Jan Hronek, and DVV President Werner von Moltke also in attendance. 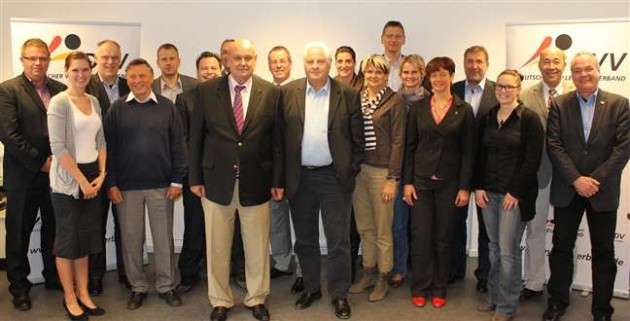 The meeting was attended also by representatives of all cities that will be hosting matches of the Championship, namely Zurich (SUI), Halle/Westphalen, Dresden, Schwerin and Berlin, thereby providing some updates about the state of the preparations as far as accommodation, logistics, marketing, finances and other technical items are concerned.

It was confirmed that the DOL for the final rounds will be organized in Zurich this coming October 6, 2012, even though the last set of teams will make it to the Championship via a third-qualification round scheduled for May 2013.

The four preliminary Pools will be hosted in Zurich, Schwerin, Dresden and Halle/Westphalen, with the “Gerry Weber” Stadion in Halle and Switzerland’s largest city playing host also to the Playoffs and 1/4 finals.

As per decision of the hosting country, Germany’s national team – silver medalist last year in Beograd – will start its quest for European glory in Halle, while the medals will be at stake in Berlin on September 13-14 with the splendid “Max-Schmeling-Halle” likely to turn into a real Volleyball “Mecca” for the last and most exciting days of action.

This will be the third time in history that the women’s European Championship takes place in Germany after previous editions were held in the German Democratic Republic (GDR, 1983) and in the Federal Republic of Germany (FRG, 1989).