Thomas Zass sets out to conquer the whole wide world of volleyball. 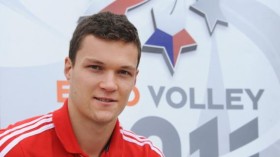 Thomas Zass smiles to the recent two leaps in his volleyball career. In 2011 he went from the Austrian to the strong French League to play for Paris Volley.

“One year contract with a possibility of another season” said Zass.

“I was told I will start in my position, but it’s clear that the competition will be tough”

He improved his game while playing in France.

“It’s a positive experience, and Paris is a very cool city, but nothing compared to the Brixental!”

He will continue to grow.