After picking up their seventh win in eight games on Saturday to clinch a finals spot in the Women’s 2012 FIVB World Grand Prix, Turkey faced a spirited German team who have been playing outstanding volleyball in Osaka thus far. Germany got off to a rocky start, but continued their strong play with a four-set win, 24-26, 25-17, 25-18, 25-15. 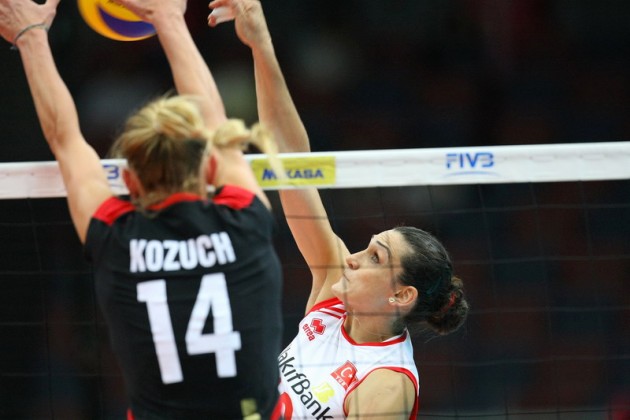 Leading the way for Germany on Sunday was their captain Margareta Kozuch with 22 points, including three blocks. She was supported by Maren Brinker who posted 13, including four of Germany’s 15 blocks. For Turkey, Bahar Toksoy led with nine points. Neriman Ozsoy, Turkey’s leading scorer in the tournament, sat out the match and Neslihan Darnel was used sparingly.

Both sides started the match shaky with a flurry of early errors, but Turkey’s captain Esra Gümus settled down and served up an ace, followed by a Büsra Cansu block on Heike Beier that put their side up 10-6. But Germany would bounce back on a hard spike by Christiane Fürst to tie at 14-14. Each team held brief leads, but it was tied at 24-24. Kozuch was aggressive for Germany – she had six points in the set – but when she fired a spike long it was ruled no touch, giving Turkey a set point. Another Kozuch spike found only tape and gave the set to Turkey 26-24.

Germany started well in the second as Turkey’s Darnel was on the bench, with Fürst putting a great block on Güldeniz Önal to put Germany ahead 6-3. But Turkey edged back ahead 7-6 with a Gümus block on Kozuch. Germany then scored six straight, going up 12-7 on a score that featured a wonderful get by Maren Brinker at the back. Teammate Denise Hanke delivered a hard spike after wonderful Germany blocking, making it 18-10. Germany closed easily from there, with scoring from Fürst and Anne Matthes down the stretch, evening the score at a set apiece.

Strong serving from Kozuch in the third pushed Germany ahead 11-8 and things only got better from there, with a pair of scores from Brinker and a hard drive from Matthes making it 19-13. Turkey’s Darnel came back into the match late, but it made little difference as Germany’s Matthes showed great hustle with a diving get at the sidelines to grab set point. She delivered her second ace after that to take the set 25-18 and put Germany 2-1 up.

The fourth set started close but Germany soon grabbed an edge, with Corina Ssuschke–Voigt serving up a pair of aces to make it 11-7, capping a run of four straight scores. Kozuch kept scoring well, serving up her second ace during a five-point run that put Germany ahead 21-13, and they closed easily from there.