One of the most successful coaches in the history of the German Volleyball Federation has officially departed from the Men’s National Team. 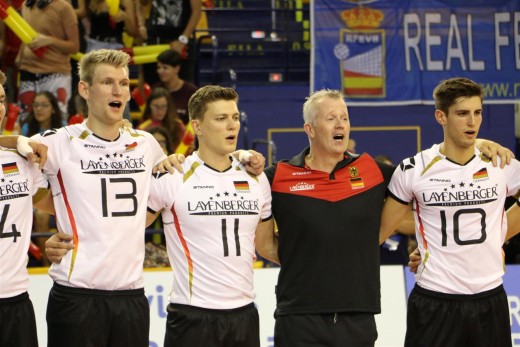 On September 25, Vital Heynen led German NT for the last time. He did it in the game of the last round of 2017 EuroVolley Qualifications against Spain (3-1 victory). Heynen could not have dreamed a better goodbye: his side has not lost any of the six qualifying encounters for next year’s European Championship.

Recall that he did not extend contract German NT in January.

From now on, he will only be the coach of German club VfB Friedrichshafen and from January 1, 2017, a head coach of Belgian National Team.

„Not only that we were promoted, but we were able to show other teams that we are still a strong squad. I hope that after these matches they will say in Europe: Damn, Germany is still darn good, even though so many famous players departed, like Schwarz and Grozer!“ Heynen said, „How did we make such a good cooperation? I don’t know, maybe it’s my madness with German precision and organization. I got bar of gold weighing a kilogram into my hands and my job was to carve piece of art out of it. And I think I did it, although it was not easy.“

Check out other news from Germany.

Road to EuroVolley M: Last round over, 13 of 16 EuroVolley participants known