Friedrichshafen, Germany, January 8, 2012. The lion’s den – that is the place where VfB FRIEDRICHSHAFEN has to play the fifth match for the prelims of the 2012 CEV Volleyball Champions League. The match between the German champion and the Belgian vice-champion Euphony ASSE-LENNIK takes place this coming Tuesday night at 8:30 pm in Leuven, which literally means “lion”. 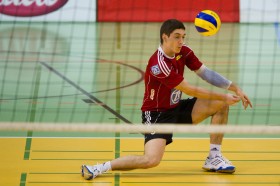 VfB FRIEDRICHSHAFEN in the lion’s den

For FRIEDRICHSHAFEN it will be the first of two chances to get a spot for the Playoffs 12.

The Germans need only one point to qualify – that means minimum two sets in the remaining matches against ASSE-LENNIK or next week at home against Russia’s Zenit KAZAN.

“We do not play just for playing or getting sets”, says FRIEDRICHSHAFEN coach Stelian Moculecu.

It sounds very self-confident. But the team from the Lake of Constance appreciates the actual situation very well.

“We know that we have to go just a short step to achieve our first goal in this competition”, says Moculescu.

“But we also know that it could be very difficult”.

Maybe this goal can be attained already on Tuesday night in the lion’s den – the Sport Oase Leuven where ASSE-LENNIK plays all home matches of the 2012 CEV Volleyball Champions League.

In spite of playing not really at home the Belgians get support from enthusiastic fans there that were one reason for the great performance they delivered against KAZAN last December.

“ASSE-LENNIK played very well against KAZAN and also against us”, stated Moculescu. “It is really a good team”.

Two days before the duel it is not sure if FRIEDRICHSHAFEN libero Nikola Rosic (pictured) will be able to be on the court.

Already before Christmas the Serbian national player injured his left arm and got a break during the Bundesliga match against Netzhoppers KW-BESTENSEE last Saturday.

“It is not sure if he will be able to play”, says Moculescu.

“But he will not come with us to Belgium if there is not a chance to get a full recovery”.