Maaseik, Belgium, January 8, 2012. After scoring a 3:1 win over Argex Duvel PUURS in the last round of the national league, Noliko MAASEIK extended its positive streak in domestic competitions to a total of 13 consecutive matches. 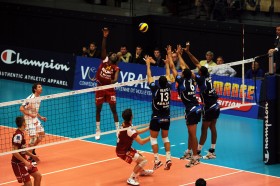 Noliko is hence ready for the fifth round of action in the prelims of the 2012 CEV Volleyball Champions League where the Belgians will play Arkas IZMIR in Turkey, the co-leader of Pool A.

Nathan Wounembaina will be missing this game after he was called by the Cameroonian national team to join a training camp in Slovenia to get ready for the African Olympic qualifier where the group will have some strong opposition from the national teams of Egypt and Tunisia.

Noliko tried to release the player from this obligation at least for the game with Arkas but could not finalize such negotiations with the Cameroonian Federation.