BERLIN Recycling Volleys will take on Jihostroj CESKE BUDEJOVICE this Thursday after outdoing VfB FRIEDRICHSHAFEN (3:1) and Generali UNTERHACHING (3:2) in the Bundesliga. This is their first game in the CEV Volleyball Champions League. Scott Touzinsky spoke of their chances. 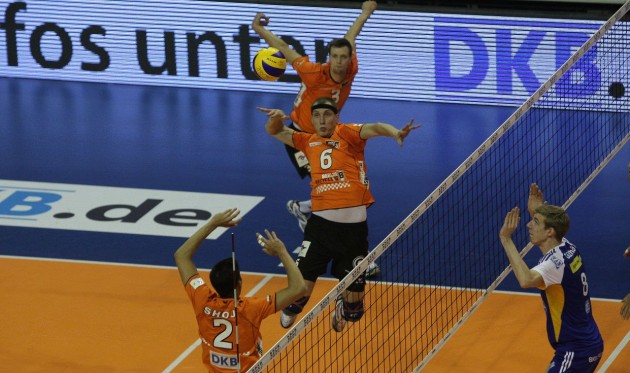 Facing three high-class opponents within ten days, the start of the new season could not have been more demanding for BERLIN Recycling Volleys. Playing two German standouts and Champions League contestants at the very beginning of this year’s campaign the preparations for the debut in the 2013 CEV Volleyball Champions League could not have been better.

“Competing against FRIEDRICHSHAFEN and UNTERHACHING right at the beginning of the season was the best warm-up we could get for our match against CESKE BUDEJOVICE”, team captain Scott Touzinsky says. “Without those games we would have been thrown in at the deep end at our Champions League debut“, the 2008 Olympic champion adds.

However, for the side of Berlin there is no reason to gear down after two important wins. “CESKE BUDEJOVICE is a very experienced team. Last year they played UNTERHACHING in the preliminary phase of the 2012 campaign and forced a fifth set in the away match – that’s a great performance”, head coach Mark Lebedew says. “Their roster entails some members of the Czech national team. I expect them to be a very tough opponent for us.”

In the Czech Extraliga, CESKE BUDEJOVICE scored a speedy 3:0 (25-17, 25-18, and 25-21) against VK Karbo Benátky and Jizerou and seems also well-prepared for the kick-off match in Berlin.

By participating in the 2013 CEV Volleyball Champions League for the team of BERLIN eventually a dream comes true: “Every player seeks for playing in Europe’s most elitist competition – you can’t compete at a higher level. When playing the best European teams you get an idea about what you are capable of – as a player and as a team”, the coach concluded.