DRESDNER SC will play tonight its first match in the 2013 CEV Volleyball Champions League against Azerrail BAKU. The match will be a little special for Judith Pietersen as she will be playing against another member of the Dutch national team, Caroline Wensink, who is also her cousin. 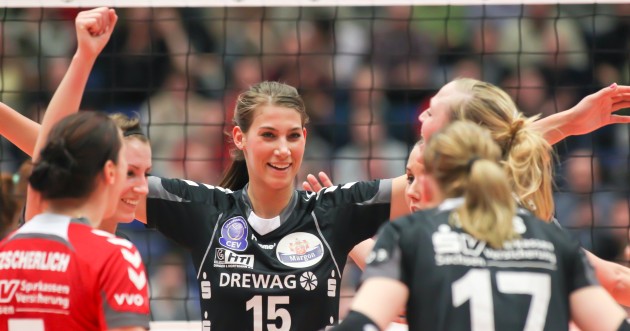 “Every match in this competition is special and we are evidently excited to play against some of the best teams in Europe” says setter Mareen Apitz.

“We don’t go to Baku just to be knocked down by Azerrail” adds coach Waibl. “We do not have much pressure and hence can display a good performance”.

The German delegation had a long journey before making it to Baku on Monday night. They first drove by bus to Halle/Leipzig airport and then flew to Istanbul for three hours. The last step was a second flight to Baku with the trip lasting finally for some 11 hours.

On Tuesday the group had a little walk around and also scouted a video of their opponents before going to the sports hall and having their first training session.

The match with Azerrail will be a little special for Judith Pietersen as she will be playing against another member of the Dutch national team, Caroline Wensink, who is also her cousin. “I am really excited to see her. Her dad, so my uncle, is also coming to Baku to see the match. This will be a very orange game as our group includes two more Dutch players, Robin de Kruijf and Myrthe Schoot, while Azerrail – apart from Caroline – has also signed Manon Flier and Debby Stam-Pilon”. It makes almost half of the Dutch national team. “Debby is a great outside hitter, Manon is one of the world’s best diagonal players and Caroline is a solid middle blocker” adds Robin de Kruijf. “We know them well and since many years, so we’ll have to find some good tactics to stand their play. This is a big challenge for us and our team”.

Azerrail has some more top players in the group, such as Italian middle blocker Sara Anzanello, the US Americans Megan Hodge and Arielle Wilson, plus Polish setter Milena Radecka and Tina Lipicer-Samec, a player from Slovenia who last year played the CL final match in Baku while representing RC CANNES.

“I am excited to see where we stand as we play a world-class side like Azerrail. We have to step up the quality of our play and do it quickly” says head coach Alexander Waibl.